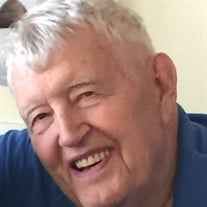 William Francis Joy Jr., 87, of Hopewell Junction passed away on May 2, 2020. Bill was born in Staten Island on July 29th, 1932 to William Sr. and Ann Joy. He served honorably in the United States Navy during the Korean War. At age 19, he married the love of his life, Madeline Fortunato on June 29th, 1952. After getting married, Bill and Madeline settled in Yorktown Heights, NY to raise a family. He worked at IBM for more than 30 years as a programmer. Bill is survived by his wife of 67 years, Madeline Joy; their three children, Anne Byrnes of Fishkill, Ginny Joy-Landi and her husband John of Putnam Valley, and Mary Salch and her husband Richard of Hopewell Jct.; their six grandchildren Tommy, Christine, Stephanie, John, Ryan, and Lauren; and their three great grandchildren Devin, Emily, and Jackson. Bill is also survived by his sister Virginia Marotta of Staten Island. Bill was known by many names: Bill, Billie, dad, grandpa, pop-pop, but it is his family name that was emblematic of his soul: Joy. Though towering over most of the people in his life at 6'4" tall, he was a gentle giant always trying to make people laugh with a PG rated joke. Humble and wholesome, he lived life with a quiet exuberance that infected all around him. His family meant everything to him, especially his dear Madeline. He was a Yankee fan and avid Giants fan--often times, he was so overcome with anxiety watching the Giants, he'd have to turn off the game in the fourth quarter and watch it later on tape. From his life at sea with the Navy going forward, he always loved the water. He could float in the pool for what seemed like hours, long after everyone else got out. His legacy will live on through his love of sports, music, the beach and most of all his family. The family will be holding a private ceremony at Rose Hill Cemetery with only immediate family present. A celebration of his life will be held at a later date. Donations can be made to the Parkinson's Foundationhttps://www.parkinson.org/ways-to-give , in lieu of flowers

William Francis Joy Jr., 87, of Hopewell Junction passed away on May 2, 2020. Bill was born in Staten Island on July 29th, 1932 to William Sr. and Ann Joy. He served honorably in the United States Navy during the Korean War. At age 19, he married... View Obituary & Service Information

The family of William Francis Joy Jr. created this Life Tributes page to make it easy to share your memories.