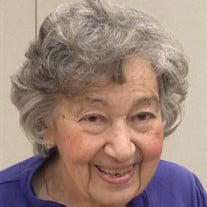 Vita Pagliaro April 23, 1929- February 14, 2022 Vita Pagliaro, a resident of the New York State Veterans Home in Montrose, passed away peacefully on February 14th, 2022 at the age of 92. Born April 23, 1929 in the Bronx, New York, Vita was the daughter of the late Dominick Delillo and Mary Bizzoco. She attended Jane Addams High School and later worked as a seamstress. On May 6, 1950, she married Joseph Edward Pagliaro. They raised their family in Yorktown Heights, moved to Jefferson Village in 1998, and in 2016 moved to the VA Home in Montrose. Vita worked at Rudolph's and also at Circle Cards and Things in Yorktown, and for years she volunteered at St. Elizabeth Ann Seton School serving lunches. An active member of the Crossroads Garden Club, Vita was known for her creativity and her blue ribbon flower arrangements. Vita enjoyed a blessed family life. She was an amazing cook and took great pleasure in passing her cooking skills on to her family. She hosted holidays and memorable family dinners every Sunday, and her children and grandchildren will forever cherish the memory of those traditions. Vita was predeceased by her loving husband Joseph Edward Pagliaro, to whom she was married for 66 years. The couple was like a treasured set of salt and pepper shakers, always together. Vita was also predeceased by her beloved sister Anna Napoletano. Vita is survived and will be missed by her children; Ida Alimonti (Darryl), Marie Smyth (Dan), and Joseph A. Pagliaro, and her siblings Vincent DeLillo, and Louise Marsalisi. Vita is also survived by her six grandchildren, seven great-grandchildren, and many cherished nephews, nieces, and cousins. Until we meet again, we will think about you always, cook with you in spirit, and celebrate the amazing life you led. Love you Mom! The family will receive friends at Yorktown Funeral Home on Sunday, February 20, from 1-5pm. A chapel service will be held Monday, 10:00am at Yorktown Funeral Home, followed by entombment at Rose Hills Cemetery, 101 Mill St, Putnam Valley, NY 10579.

The family of Vita Pagliaro created this Life Tributes page to make it easy to share your memories.

Send flowers to the Pagliaro family.