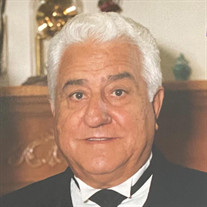 Victor (Vittorio) Fontecchio of Cortlandt Manor, formerly of Mamaroneck, NY passed away on September 12, 2021 surrounded by his family. He was 90 years old. Victor was born in Capestrano, Italy on October 7, 1930 to Alfonso and Antonina (Pietrantonio) Fontecchio. Victor emigrated to the United States in 1947 and settled in Wisconsin. Here he worked for the railroad and then worked for Peninsula Granite in Michigan making tombstones. He married Angela DiGianvincenzo in 1956 in Capestrano, Italy. Together they settled first in Spread Eagle, Wisconsin before coming to Mamaroneck, NY in 1962. Here he worked as a laborer and landscaper for various construction companies. He then was employed by the Village of Mamaroneck and retired in 1996. Victor enjoyed working with his hands and was a skilled mason. When not working, Victor could be found taking care of his garden, making homemade wine, sauce and sausage. He also enjoyed hunting and cooking for his beloved family. Devoted father of Patricia (David) Addis, David (Susan) Fontecchio, Francesca (Jeffrey) Wilson and Pina Bruno and irreplaceable grandfather of eight and great-grandfather. He is predeceased by his wife Angela, his son Victor, brothers Manfredo and Osvaldo, and sisters Elena Jafolla, and Dora Giannunzio. Reposing Wednesday from 4 to 8pm at Yorktown Funeral Home, 945 East Main Street, Shrub Oak NY. Funeral mass Thursday, 10am at St. Patrick's Church at 137 Moseman Road, Yorktown Heights, followed by Entombment at Gate of Heaven Cemetery. Memorial donations may be made to Yorktown Assisted Living, 2276 Catherine Street, Cortlandt Manor, NY 10567 or Westchester Putnam Hospice.

Victor (Vittorio) Fontecchio of Cortlandt Manor, formerly of Mamaroneck, NY passed away on September 12, 2021 surrounded by his family. He was 90 years old. Victor was born in Capestrano, Italy on October 7, 1930 to Alfonso and Antonina (Pietrantonio)... View Obituary & Service Information

The family of Victor Fontecchio created this Life Tributes page to make it easy to share your memories.

Send flowers to the Fontecchio family.