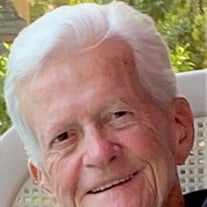 Timothy Francis Donohue, 85, passed away after a short illness on September 30, 2021 in Los Angeles, California. Timmy, also known as Buddy by many in the family, was born at Westchester Square Hospital in the Bronx, New York, on September 18, 1936 to Timothy and Kathleen Donohue, both of Ireland. He was the oldest of five children who were all raised in the Bronx, spending their summers on Rockaway Beach. Timmy attended St. Luke’s Elementary School and Rice High School. Shortly after graduation, Timmy joined the Air Force Reserve and was honorably discharged on February 25, 1963. After high school, he also began working in the press room at The New York Times. His hard work paid off, and he was admitted into the Pressmen’s Union on March 1, 1956. He rose through the ranks and retired after almost 50 years as a Pressman-In-Charge on December 1, 2004. Timmy was preceded in death by his wife of 48 years, Ellen (Hayes) Donohue; his parents; his brother, Kevin Donohue; and his sister Kathleen (Donohue) McCoy. He is survived by his children, Stephen Donohue and Tricia Donohue; his daughter-in-law, Danielle Donohue; his son-in-law, Paul Cassell; his grandchildren, Alyssa and Justin Donohue and Leo and Max Cassell; his sister, Maureen Chryssikos and brother-in-law Telemac Chryssikos; his brother, Brendan Donohue; his brother-in-law John McCoy; eight nieces and nephews, and many grandnieces and grandnephews. Timmy will be laid to rest with Ellen on Saturday, October 9, 2021, at Rose Hills Memorial Park in Putnam Valley, New York, on what would be their 50th wedding anniversary. Family and friends can join the wake on zoom from 6pm to 7pm on October 8th https://us05web.zoom.us/j/87906113827?pwd=S1FLSGRCM3hDeWtrd1lnLzlQenRnZz09 Meeting ID: 879 0611 3827 Passcode: hvS3T3 Funeral Service For Timothy Donohue Time: Oct 9, 2021 09:45 AM Eastern Time (US and Canada) Funeral Service https://us05web.zoom.us/j/88508216951?pwd=cmExblczcmY1eWZHNFJuVVUwZjV6QT09 Meeting ID: 885 0821 6951 Passcode: K9y7E4

Timothy Francis Donohue, 85, passed away after a short illness on September 30, 2021 in Los Angeles, California. Timmy, also known as Buddy by many in the family, was born at Westchester Square Hospital in the Bronx, New York, on September 18,... View Obituary & Service Information

The family of Timothy F Donohue created this Life Tributes page to make it easy to share your memories.

Timothy Francis Donohue, 85, passed away after a short illness...

Send flowers to the Donohue family.