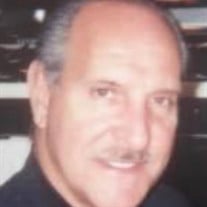 Please go to https://seton-parish.org/ to view the funeral mass on Wednesday at 10am. Please scroll down the live stream is on the main page. It is with love and great sadness that the family of Thomas J. Pomposello, Sr. announce his passing on February 5th, 2021, at the age of 73. Tom was a longtime resident of Westchester County and an ironworker retired from Local 580 with over 30 years on the job. The youngest son of Concetta Pomposello (née Bellafatto) and Arthur Pomposello Sr., Tom was born on Sept. 3, 1947 in New York City. Growing up in the Bronx, he spent his childhood cheering on Mickey Mantle’s New York Yankees, often occupying the bleachers as the team won eight World Series titles in the 1950s and 60s. Before settling down and starting his career and family, Tom served his country in the U.S. Army. In addition to baseball, Tom also had a passion for hockey which included a stint moonlighting on the New York Rangers’ equipment staff in the 1970s. Year in and year out, he watched hundreds of NHL games per season, not supporting any one favorite team in particular but always rooting for a well-played game on the ice. He made it a point to travel the world throughout his life, exploring places such as Italy, Egypt, Israel, and the Caribbean, often alongside family members. In later years, Tom developed an appreciation for golf, dancing, wine, and cigars, and he served as Captain for the annual Feast of San Gennaro in Yorktown Heights. Tom is survived by his eldest brother, Arthur Pomposello Jr. of New York City, as well as his children, Laura Walz of Hughsonville and her husband, John, Thomas J. Pomposello Jr. of Mohegan Lake, Michael Pomposello of Pleasantville, and Tara Pomposello of Peekskill. In addition, Tom is survived by three grandchildren, Nicholas Walz of Fishkill, Ryan Walz of Croton-on-Hudson, and Cody Pomposello of Yorktown Heights, two great-grandchildren, Bianca Walz and Aidan Walz, and many extended family members who knew Tom in life to gregarious at holidays and get-togethers with those he loved, rarely at a loss for words. He is also survived by his lifelong best friend Craig Williams as well as his loving companion Sylvia Adorno, affectionately referred to as “Cha Cha,” and his little four-legged buddy JayB (“Fuzzy”). Visitation will be held on Wednesday, February 10th, from 4 PM to 8 PM at the Yorktown Funeral Home, 945 East Main St., Shrub Oak, NY. A funeral mass will be held on Thursday, February 11th, at 10 AM at St. Elizabeth Ann Seton Catholic Church, 1377 East Main St., Shrub Oak, NY. He is, and forever will be, our “Pal”

Please go to https://seton-parish.org/ to view the funeral mass on Wednesday at 10am. Please scroll down the live stream is on the main page. It is with love and great sadness that the family of Thomas J. Pomposello, Sr. announce his passing... View Obituary & Service Information

The family of Thomas Pomposello Sr. created this Life Tributes page to make it easy to share your memories.

Please go to https://seton-parish.org/ to view the funeral mass...

Send flowers to the Pomposello family.