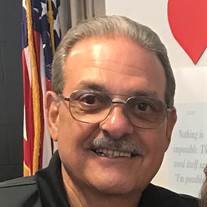 Thomas Steven Addonizio of Danbury CT. passed away peacefully, surrounded by his family, on Sept. 7, 2020.  Thomas was born in the Bronx on Feb. 4, 1947 to Antonio & Carmella (nee Paulmeno) Addonizio.  He married Antoinette (Ninette or Nina) Siclari on February 28, 1976.   He is survived by his wife Nina, daughters Samantha Addonizio-Butts (William C. Butts), Tarmi Addonizio Eisenman (Robin Eisenman) , Antoinette Addonizio Freund (Tim Freund), son Thomas Addonizio and a sister and brother-in-law, Arlene and Lou Farina.  He is also survived by three grandchildren: William LaPeruta, Samuel Walker Butts, and Ethan Tucker Butts as well as a close network of family and lifelong friends.  Predeceased by his brother Carl Addonizio. Tom’s interests were many and he approached them all with gusto, from setting up train sets (which turned into a whole city) to making wonderful food (which turned into feasts), but his greatest passions by far were his family, his music and his car. He was happiest with his family around him, sharing a meal, telling the children his (very) original bed time stories, watching a good horror movie, and of course, the best part of every year: celebrating the magic of the holidays together. In his later years, when he wasn’t with his family, he filled his time working - fanatically - on his most beloved car, a beautiful Cobra mustang, which also survives him. His life long passion for music began when Tom was a teenager. Tom was a self-taught musician who played tenor saxophone and keyboards, specifically the B3 Hammond organ. He was a member of the 1960s band, The Wanted and the 1970s band, Amazing Grace. All who knew Tom well, were familiar with his favorite songs and these formed the soundtrack of his life. We invite you all to share in that soundtrack by listening to the playlist here: https://open.spotify.com/playlist/4np7rX6yRXXEmqLl7iaMyj?si=e4MhJ NEGTd-uTXXpR1n2Mw

Thomas Steven Addonizio of Danbury CT. passed away peacefully, surrounded by his family, on Sept. 7, 2020.  Thomas was born in the Bronx on Feb. 4, 1947 to Antonio &amp; Carmella (nee Paulmeno) Addonizio.  He married Antoinette (Ninette or Nina)... View Obituary & Service Information

The family of Thomas Addonizio created this Life Tributes page to make it easy to share your memories.

Send flowers to the Addonizio family.