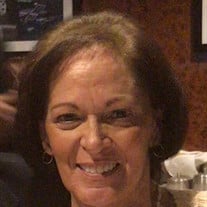 A cherished wife, mother, grandmother, daughter and sister, Susan F. Berger, 66, of Putnam Valley, New York, passed away peacefully on February 3, 2019. Susan was born on September 21, 1952 to William and Alice Whitehill and was raised in Putnam Valley, New York. She met her future husband in kindergarten and they remained in the same class through the eighth grade. They started dating at thirteen-years-old and Susan eventually married her best friend, A. Christopher Berger on March 30, 1974. Through almost 45 years of marriage, Susan and Chris raised three children, Christopher H. Berger, Jennifer Berger and Brett Berger. Susan embraced all that being a grandmother had to offer. She was absolutely adored by her three grandchildren, Kelsey Berger, Jameson Berger and Reese Berger. Susan was retired from the Putnam Valley Central School District where she worked for 41 years in education. She was a beloved teacher and colleague. She positively impacted the lives of thousands of students and was a mentor to many new teachers. Susan was very passionate about education and helping others, but above all, she loved being a mother and grandmother. She lived her life for her family and had a heart of gold. Susan was known for her infectious smile, her selfless ways, and her kind and compassionate spirit. She will be deeply missed by her family and friends. Susan was preceded in death by her mother Alice, her father Bill, and her granddaughter, Kelsey. She is survived by her husband and three children, her two daughter-in-laws Lisa Berger and Stefanie Berger, her brother and sister-in-law William and Cathy Whitehill, her sister and brother-in-law Alice and John Kroohs, and sister and brother-in-law Linda and John Dillon, her two grandchildren, and several cousins, aunts, uncles, nephews and nieces. A wake will be offered on Wednesday, February 6, 2019, from 4:00 p.m. - 7:00 p.m. at the Yorktown Funeral Home, 945 East Main St., Shrub Oak, NY 10588. A funeral mass will be held at St. John the Evangelist Church, 221 East Lake Blvd., Mahopac, NY 10541 on Thursday, February 7, 2019 at 10:00 a.m. Donations can be made in Susan's name to St. Jude Children's Research Hospital.

A cherished wife, mother, grandmother, daughter and sister, Susan F. Berger, 66, of Putnam Valley, New York, passed away peacefully on February 3, 2019. Susan was born on September 21, 1952 to William and Alice Whitehill and was raised in... View Obituary & Service Information

The family of Susan F. Berger created this Life Tributes page to make it easy to share your memories.