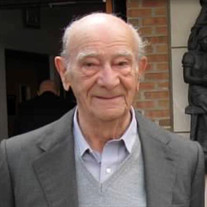 Stephen Paul DeNorio of Shrub Oak, NY, passed away on June 10th, 2020. Stephen was born December 26th, 1925, in Peekskill, NY, to Paul and Philomena DeNorio. He went on to serve honorably in the United States Navy during World War II after... View Obituary & Service Information

The family of Stephen Paul DeNorio created this Life Tributes page to make it easy to share your memories.

Send flowers to the DeNorio family.