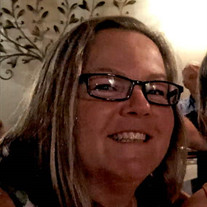 Sheila Fleitz Lux passed away at Memorial Sloan Kettering Hospital in NYC on September 23, 2020, after a short battle with cancer. Born on July 17, 1968 in Peekskill, NY, she was the daughter of James & Sheila (McCarthy) Fleitz. Growing up in Cortlandt Manor, Sheila attended St Columbanus Parochial School and Walter Panas High School, before heading to SUNY Cobleskill, where she studied Early Childhood. Sheila started working at the Blue Book in Jefferson Valley in 1989 as an administrative assistant and during her 31 years there she worked her way up to Sales Administration Supervisor . Along the way she made many friends and was a valued employee, highly thought of by both the company owner and her coworkers. In 2006, Sheila married her best friend and the love of her life, Rob Lux. They settled in Mahopac. Always a caring and selfless personality, Sheila became involved with Rob’s life in the fire department, and went out of her way to help anyone in need, even strangers. In 2007 Rob & Sheila welcomed their beautiful daughter, Regan Kathleen, and their life was complete. Sheila loved being a mother, and life revolved around Regan! A wonderful and proud Mom, Sheila could be found everywhere with Regan - at school and church events, watching the St Patrick’s Day parade, planting her garden, and cheering Regan on at her sporting events. Sheila, Rob & Regan traveled to events near & far! Every summer the family made a trip to their “happy place” on the Connecticut shore. On each of these adventures, Sheila could be found taking “selfies” with her family and friends. Always included was one with a goofy face….so there was always something to smile about! Whether holidays with her actual family, outings with her “girlies”, walking the rescue dogs on Sundays, or swimming in the pool in their yard, Sheila always made sure it was “family first”. Sheila leaves behind her loving husband, Rob, and daughter, Regan, who she adored. She was predeceased by their parents, James & Sheila Fleitz and George and Margaret Lux, as well as Rob’s sister & brother-in-law, Mary & John Apon. Surviving siblings are; James (Mary), Joseph, Kathleen & Kristine Fleitz, and Kerriann (Arthur) D’Angelo. Additionally, Rob’s siblings: Eileen (Nikolas) Nelson, Carol Lux and Michael Connelly, George Lux, Jr and Maureen Lux. Many nieces and nephews who loved their Aunt Sheila also survive her. Funeral arrangements are being handled by Yorktown Funeral Home, Shrub Oak, N.Y. The wake will be held on Sunday, 9/27, from 4-8pm, and Monday, 9/28, from 2-4pm and 7-9pm. A funeral mass will be held at St John the Evangelist Church in Mahopac on Tuesday, September 29 at 10:00am. In lieu of flowers, please consider a donation to St Jude’s Children’s Hospital in Sheila’s memory.

Sheila Fleitz Lux passed away at Memorial Sloan Kettering Hospital in NYC on September 23, 2020, after a short battle with cancer. Born on July 17, 1968 in Peekskill, NY, she was the daughter of James & Sheila (McCarthy) Fleitz. Growing up... View Obituary & Service Information

The family of Sheila Lux created this Life Tributes page to make it easy to share your memories.

Send flowers to the Lux family.