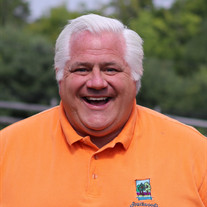 Scott Allan Ralls of Cortlandt Manor passed away on Sept. 3, 2020. Scott was born on March 24, 1964 in Herrin Illinois. Scott was raised in Benton, Illinois by his mother Donna K. Smith and Charles Smith. Scott graduated from Murray State University in Kentucky. On April 22, 1995 he married Andrea Durr in Benton Illinois. Scott has dedicated his entire professional life to providing growth opportunities to children and young adults. Along with Andrea, his wife, Scott was the founder, owner and director of Southwoods, a premiere 4-Week Residential Camp in Upstate NY and owner of Summer Trails Day Camp, in Westchester County, NY. Scott began his career in youth development after his first summer working with Amy and Morry Stein at Camp Echo Lake more than 30 years ago. During his career, Scott was a true leader in the camping industry. He served for many years on the American Camp Association, NY and NJ Board including a term as President. Scott was a current board member for the New York State Camp Directors Association as well as a board member for The American Camp Association National Board. Scott was a founding Board member and has served on the Project Morry Board continuously for 21 years, including the role of President. He is the Founder and CEO of the Donna Kaye Smith Scholarship Fund. An organization that provides 4 year college scholarships to those who otherwise might not be able to attend. Scott, has always been a champion for the camp industry and worked hard to make sure that all children had the opportunity to attend camp. He earned many awards and accolades along the way but the thing Scott was most proud of was his relationship with his wife Andrea and his three daughters Emma, Sydney and Bailey. Family was everything to Scott and being a father was his most important achievement and greatest blessing. The impact he has had on his many camp colleagues, friends and family is far and wide. Scott's legacy will live on in those of us whose lives he touched. Scott is survived by his wife Andrea, 3 daughters; Emma, Sydney and Bailey and a sister Valarie Durham. His Aunt Carolyn South, cousins Lex and Cathy Turner(Chelsea, Eric), Kim and Bill Reynolds(Ryan and Ross), cousins Josh and Lora Smith(Zadok, Aletta, Tamsin) Alex and Amanda Smith (Alivia) , Anna and Randy Lane (Oliver) ,Mother in law Sandra Durr ,Father in Law Paul Durr II, Brother and Sister in laws, nieces and nephews; Alissa and Chris Simmons(Ethan, Ainsley, Rowan, Finn), Shannon and Kicke Gomez(Giovanni), Paul and Cindy Durr (Anna and Adam) and countless friends who have become family. We will honor Scott's life on Tuesday, September 8, 2020 from 12-2 pm and 4-8 pm at the Yorktown Funeral Home in Shrub Oak, NY. On Wednesday September 9, 2020 the funeral service can be viewed at https://client.tribucast.com/tcid/59417136 In lieu of flowers, we encourage you to donate in memory of Scott to Project Morry (http://projectmorry.org/donate ) or the Donna K. Smith Scholarship Foundation (checks can be sent to PO Box 201, Granite Springs, NY 10527)

The family of Scott Allan Ralls created this Life Tributes page to make it easy to share your memories.

Scott Allan Ralls of Cortlandt Manor passed away on Sept. 3,...

Send flowers to the Ralls family.