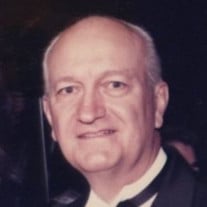 Rocco C. Cardillo passed away at the age of 94 on Saturday April 18, 2020. Rocco was born and raised in Pelham, NY. He attended Pelham High School and graduated in 1943. While in high school, he was an honor roll student, played varsity baseball and was voted "most likely to succeed". It was here that Rocco developed his lifelong passion for learning and he was affectionately known in his childhood as "The Professor". In November, 1943, Rocco entered the United States Marine Corp and proudly served his country for three years during World War II, initially as a private first class, then Corporal, and finally as a Sergeant. He spent much of his service time in the Pacific theater. He and his fellow servicemen took part in many of the battles in and around the Philippines. Upon his return to the US, Rocco enrolled in the Lincoln Chiropractic College, Indianapolis, Indiana and graduated in 1949. Rather than pursue a career in chiropractic medicine, Rocco began working for his father and with his brothers in the construction industry. It was during this time that Rocco developed his expertise in the trades, most notably general carpentry and fine woodworking. He also earned a reputation for being able to fix just about anything. On May 2, 1954, Rocco married Josephine Panettieri of Mount Vernon, NY. They began their 65 years of life together in Bronxville, NY and the family expanded over time with the addition of four children - James, Richard, Carol and Diane. In 1958, following a successful career in construction, Rocco followed his passion for learning, leveraged his construction background, and took a job teaching carpentry at Saunders Trades and Technical High School in Yonkers, NY. It was at this point that Rocco and Josephine moved the family to Yonkers and thus began Rocco's 30-year career in public service in education serving the city and youth of Yonkers. To further his knowledge and credentials in Education, Rocco attended night school for nine years. He graduated in 1967 with a Bachelor's degree in Education from the City University of New York, and earned a Master's degree in Education from New York University in 1971. Obtaining his degrees in Education allowed Rocco to advance his career, marked by a series of new assignments and promotions. He became an Assistant Administrator at Saunders High School in 1969, was assigned to lead the Yonkers Career Center in 1970, and was named Principal of Saunders High School in 1973. In 1976, he moved to the Yonkers Board of Education as Assistant Director of Vocational Education, was promoted to Director of Vocational Education in 1977, was named Assistant Superintendent for Instructional Services in 1979 and finally was promoted to Deputy Superintendent of Yonkers Schools in 1982, the position he held until his retirement in 1988. In addition to his career serving Yonkers in his education roles, Rocco also found time to serve Yonkers in many other ways. He was a long-time member of the Yonkers Chapter of the International Rotary Club and was elected President in 1979. He also served on the advisory councils and boards for several other organizations in Yonkers, most notably the City Manpower Program, the Education Opportunity Center, the YMCA, the Enrico Fermi Scholarship Committee and the Executive Occupational Planning Committee. Following his retirement in 1988, Rocco devoted much of his time to his family. He was also determined to learn and master new skills and hobbies. Rocco continued to stay active by taking on all home improvement projects for his children. He also became an avid painter, fine-tuned his photography skills, mastered the game of golf and was the family computer technology expert. It was often "Call Grandpa, he'll fix it." Rocco is predeceased by his parents, Domenico and Giovannina Cardillo, three brothers, Carmine, Albert, and Anthony, and two sisters, Mary and Feniza. He is survived by his loving wife, Josephine, his brother Dominic, and his children -James and his wife Cynthia, Richard and his wife Gina, Carol and her husband Peter, and Diane and her husband Dennis. He is also survived by thirteen grandchildren and one great grandson - Jason, Matthew, Melissa, Cathryn, Heather, Christina, Victoria, Francesca, Joseph, Samantha, Marisa, Daniella, Nicholas, and Chase. A small ceremony for the immediate family is planned for Thursday April 23 but a memorial mass and a larger celebration of his life will take place at a later date. In lieu of flowers, we ask you to consider a donation to the Parkinson's Foundation () in the form of a "Tribute Gift" in memory of Rocco Cardillo.

Rocco C. Cardillo passed away at the age of 94 on Saturday April 18, 2020. Rocco was born and raised in Pelham, NY. He attended Pelham High School and graduated in 1943. While in high school, he was an honor roll student, played varsity... View Obituary & Service Information

The family of Rocco Cardillo created this Life Tributes page to make it easy to share your memories.

Rocco C. Cardillo passed away at the age of 94 on Saturday April...

Send flowers to the Cardillo family.