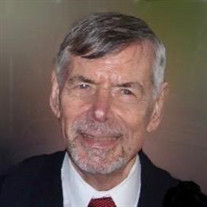 The Strechay Family regrets to announce the passing Robert John Strechay, age 78, of Shrub Oak, NY, and formerly of Parsippany, NJ, after a 13-year battle against Parkinson’s Disease, at Hudson Valley Hospital in Cortland, NY. Bob, as he liked to be called, was not a man of many words – in fact he only knew maybe one or two jokes – but he preferred to be known for his actions, work ethic and character. Born in New York City in 1941, to immigrant parents from Czechoslovakia, John and Elizabeth (Prascsak) Strechay first relocating to Mount Pocono, PA and later to Lower Nazareth, PA (preceded). He enlisted in 1963 in the U.S. Army, assigned to the Signal Corp, and served in the Philippines, in Da Nang, Vietnam, as well as domestic postings. He was honorably discharged in 1967 and attended college undergrad in accounting at Wilkes College, in Wilkes Barre, PA. There, Bob meet his wife of nearly 50 years, Susan (Smith) Strechay, of Matamoras, PA in 1967 Professors DeYoung’s Economic History class. After explaining his name was pronounced, Strechay, “like a stretching a rubber band,” they began to get to know each other, date and were married in 1970. They moved to Parsippany, NJ in 1972, welcoming their first son Robert (Rob) J. Strechay, Jr. in 1974 and twin boys Joseph (Joe) A. Strechay and Daniel (Dan) S. Strechay in 1978. After graduating, Bob worked for Deloitte and Touche where he became a Certified Public Accountant (CPA). After a number of years in the “Big 5” he moved to Allied Stores Corporation, where he served as Vice President and Chief Operations Officer, in 1986 leading the charge against the unsolicited take-over bid by Campeau Corporation, in the Leveraged Buyout frenzy. After the eventual acquisition by Campeau Corporation, he led the merger with Federated Department Stores in 1988. By 1990, Bob was ready for his next chapter, leaving to establish a consulting business, Advantage Resources. After working on the 1993 special election campaign that saw Mimi Letts elected as Mayor of Parsippany Troy-Hills, Bob was appointed to the position of Business Administrator and served until 2004 when he became the Director of Utilities until his retirement in 2011. Working under Democratic Administrations (Letts, Luther) and a Republican Administration (Barberio), Bob was seen as a pragmatist who valued bi-partisanship as the best way to serve the residents of the township. Bob also served as Treasurer of Parsippany-Troy Hills Senior Citizen Housing Corporation, Scoutmaster for Troop 173, and Treasurer of the Natural Glass Corvette Club. Bob enjoyed his grandchildren, restoring antique cars – in particular his 1965 Corvette – and of course working, a lot. He is survived by his wife Susan P. (Smith) Strechay of Shrub Oak, NY; his brother Ernest and Sister-in-law Linda Strechay, Lower Nazareth; son Robert and wife Kristen Strechay, grandchildren Samuel and Lauren of Hopkinton, MA; son Daniel and wife Kathryn Strechay, grandchildren Nathaniel and William (Lewisboro, NY); Son Joseph and wife Jennifer Strechay (East Pennsboro, PA); and niece Michelle (Strechay) Tauber, nephew Michael and wife Jamie (Youst) Strechay and eight grandnieces and grandnephews. The viewing will be held at Yorktown Funeral Home (945 E Main St, Shrub Oak, NY 10588) on 24th, November 2019 from 2pm to 6pm. Memorial church service will be held 25th, November 2019, 10am at St. Elizabeth Ann Seton Roman Catholic Church (1377 E Main St, Shrub Oak, NY 10588) and interment to follow the service at Rose Hill Memorial Park (101 Mill St, Putnam Valley, NY 10579). In leu of flowers, the family requests that donations be made to Michael J. Fox Foundation (https://www.michaeljfox.org/donate) to continue the fight against Parkinson’s Disease.

The family of Robert Strechay created this Life Tributes page to make it easy to share your memories.

The Strechay Family regrets to announce the passing Robert John...

Send flowers to the Strechay family.