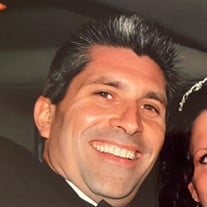 Robert J. Gritz of Putnam Valley, New York, passed away on Dec. 8, 2021. Robert was born in the Bronx on June 18, 1966 to Robert W. Gritz & Elayne Gritz. He married Maranda Zocchi on Nov. 16, 2008. Robert graduated from Mount Saint Michael’s Catholic Academy and went on to pursue his passion for acting through Pace University and continued through Vital Theatre Company. He went on as a Maitre D at Gino’s Restaurant on Allerton Avenue in the Bronx, NY. He loved running his Laundry Business for over 30 years. He went on to drive a school bus for his daughter’s school district and loved every child as if they were his own. Robert’s greatest passions in life were his children. He had a passion for boating, camping, vacations, Disney, Broadway plays, building projects, fixing things, animals and motorcycle riding with The Boys! He loved watching movies and educating his children on every movie ever made. He made friends wherever he went and had such love for his friends that one could only envy. He was always doing for every friend he had. Days went by for 21 years of hearing Marco, John John, Guy, Sal, Anthony, Ben, Mike Sheehan, Eddie, John Scrocca, Joe, Frankie, Pete, Lou Reda, Kirk, Mike Reda, Dominick, Pat Tarpey and Dr. William Assante. That saying “TMI” was frequently used by his wife because sometimes the detail of these guys were too much. He was proudly initiated into Dr. Pete Richel’s “Dads with Daughter’s Club”. Bobby was the most dedicated Dad, Friend, Brother, Husband, Son, Animal Lover, Actor, HoneyBunnyAss and Business Owner. He was also a proud Girl Scout Dad for 4 years. Robert is survived by his wife Maranda, daughter Delina Elizabeth, son Robert Joseph Gritz Jr., mother Elayne, brother Jeffrey and his wife Linda and his sister Karen Gritz. Robert was predeceased by his father Robert. Also survived by his Niece Megan and Nephews Robert, Vincent, and Christian. He is also survived by his brother-in-law Val Zocchi and his wife Kathleen Zocchi, as well as his Aunt Loretta and Uncle Larry, many cousins, and thousands of friends. In lieu of flowers please donate to Communitycares.org

The family of Robert J. Gritz created this Life Tributes page to make it easy to share your memories.

Send flowers to the Gritz family.