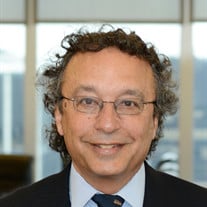 Robert S. Davis, of Croton-on-Hudson, NY, died on January 2, 2019, at the age of 71. Bob was born to David and Judy (née Schwartz) Davis on March 18, 1947, in Brooklyn, NY. Bob attended General Douglas MacArthur High School in Levittown, NY, where he was an avid debater and musician. He graduated from Wesleyan University in 1969 and from Yale Law School in 1974, a less than surprising path for a man whose earliest memories were of pacing in front of the televised McCarthy hearings shouting "Point of order!". Bob began his law career clerking for the Hon. Jon O. Newman, U.S. District Judge, District of Connecticut (1974-1975). He was Counsel to the New York City Deputy Mayor for Criminal Justice (1978-1980) and to the Chairman of the New York City Planning Commission (1980-1981). He was a partner at Berle Kass and Case (1981-1994), Robinson Silverman (1994-2002) and Bryan Cave LLP (2002-2014), where he developed a successful and highly regarded land use practice, representing developers, non-profits and municipal agencies. He took great joy in his work, modeling for his children the ideal of loving what you do, and was considered one of the leading zoning and land use lawyers in New York City. Bob served for more than 20 years as a trustee of Project Renewal, a non-profit organization that provides employment, job training, medical care, shelter and other social services to homeless persons with mental health issues. He was also a trustee of the Van Alen Institute. Bob was an active member of Congregation Sons of Israel in Briarcliff Manor, where for 25 years he served as a member and later chairman of the Ritual Committee. He enjoyed reading from the torah and helping others as they learned to do the same. In his 71 years, Bob lit up many rooms with his intellect, his wit, and his love of languages and music, for which he had a true talent. He enjoyed playing his favorite folk songs on numerous instruments, which he could leave for years and pick up again as if no time had passed. His crowning musical achievement was an original composition for his daughter, which is now forever immortalized in the memories of those who surrounded him in his final, more repetitive years. Bob was an avid outdoorsman, with a love of birds and the beach - your go-to man if you needed to know which parking lot to choose at Jones Beach. Most of all though, Bob loved his children: Rachel, Ben, and Noah, and his daughter-in-law, Christie. With them, Bob had the patience of a saint. He not only tolerated their relentless (and affectionate) mocking, but he answered it with a smile and a hug. He was as encouraging and supportive as he was patient, almost challenging his children to find an idea he would not back enthusiastically. He will be sorely missed. In lieu of flowers, please make donations in Bob’s name to the Association for Frontotemporal Degeneration and to the Congregation Sons of Israel Organic Farm Fund, at 1666 Pleasantville Road, Briarcliff Manor, NY 10510.

The family of Robert Samuel Davis created this Life Tributes page to make it easy to share your memories.

Send flowers to the Davis family.