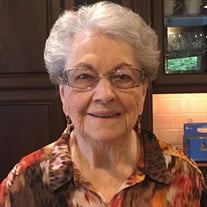 Rita Sass Gottfried, age 94, died peacefully at Lenox Hill Hospital in New York City on December 1, 2020. Rita was born in Newark, New Jersey on February 12, 1926 to Irving and Bessie (Lieb) Sass, proud Jewish immigrants to the United States who had fled violent and authoritarian regimes in their home countries of Poland and Russia, and who later operated the Rose Dairy of Newark. She graduated from Weequahic High School in 1943 and Montclair State Teachers College in 1947. She had a beloved older sister, Sylvia Sass Lieb, who predeceased her in 1987. She had a whirlwind romance with a young Army Captain, Dr. Arthur Gottfried, who had just returned from service in Korea. Arthur proposed in front of Macy’s Department Store on West 34th Street, one block from his dental practice. They married in 1949 and shared 64 years of happiness and devotion before Arthur’s passing in 2013. The young couple lived in Forest Hills NY, before moving to New Rochelle. Rita taught social studies before raising three sons and becoming the President of the Wilmot Hadassah Chapter and an active member of the New Rochelle League of Women Voters. She worshipped with her family at Temple Israel of New Rochelle, where she was a member emeritus. She had a second career as a child and senior protective worker and supervisor with Westchester County, from which she retired in 1995. Rita and Arthur enjoyed a vibrant and rewarding retirement from their home at Heritage Hills in Somers, New York, where Rita lived for 26 years. Rita valued her affiliation with the Tamar Chapter of Hadassah, the Somers League of Women Voters, her membership in two book groups, several mah jongg clubs, and regular outings for Chinese food and ice cream with friends and family. Prior to Arthur’s passing, he and Rita traveled widely in Europe and Asia, and devoured Broadway shows as often as they could attend. Rita also loved visiting the Jacob Burns Film Center, Emmeline Theater, and An Evening Dinner Theater, as well as the Somers Library where she always had a book checked out. Rita made good use of the swimming pools and bocce and shuffleboard courts at Heritage Hills, especially when hosting “Camp Gottfried” each summer for her grandchildren. Rita had many long and lasting friendships at Heritage Hills which endured during the recent pandemic through daily phone calls of concern for one another. Rita leaves behind a rich legacy and example of lifelong learning and civic engagement. She was passionate about current events and staying curious and involved. Even when recently very ill, she went to great lengths to cast her absentee ballot for the restoration of our democracy. Rita is survived by her three devoted sons and their wives: Dr. Irving and Jeannine Squires Gottfried of Pittsburgh, PA; Michael and Maureen Byrne Gottfried of North Andover, MA; and Richard and Stacey Freeman Gottfried of Rockville, MD. She also leaves six beloved grandchildren: John and his wife Katie, Alexander, Daniel, Samuel, Sydney Jean, and James. She was predeceased by her first grandchild, Caroline. She also leaves her surrogate grandchildren from the extended Byrne family with whom she shared “Franksgiving” each year, and dear nieces and nephews Carin and Paul Feldman, Hilarie Lieb and Morrie Goldman, Irwin and Elise Lieb, Marc and Doe Saphir, and Marjorie and Bob Fish and many great nieces and nephews. She was predeceased by her beloved niece Cynthia Lieb and dear sister in law Shirley and brother in law Robert Saphir. A celebration of Rita’s life will be planned for the spring or summer 2021. Memorial donations may be made to Hadassah or the charity of one’s choice.

The family of Rita Gottfried created this Life Tributes page to make it easy to share your memories.

Customized sympathy cards. Mailed for you.