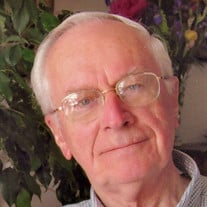 Richard Alan Sammel, age 89 passed away Sunday, February 13, 2022. Richard "Dick" Sammel was born in Queens, New York, and raised in Rye, New York. A son of the late Blanche and John Sammel, he graduated from Rye High School and later joined the United States Air Force where he was stationed in Okinawa during the Korean War. After his service, Mr. Sammel met Miss Mary Hayslett and fell in love. After a whirlwind, six-month courtship they were married; a loving marriage that lasted 49 years. He had a successful career in sales as an account executive, and after he retired, he enjoyed a "second wind" career as an artist. Mr. Sammel, standing shoulder-to-shoulder with his wife Mary, selflessly shared their time and energy to make their community better. He was a fixture for over 50 years as an usher at the 9:15 mass at Saint Patrick's Church in Yorktown Heights. As his sons grew, he was involved in Scouting and youth sports. He was the founding President of the Yorktown Touchdown Club. Since he 'retired', Mr. Sammel also has volunteered at the New York Presbyterian Hudson Valley Hospital emergency room for nearly 25 years. For many years, Dick and Mary volunteered with the American Red Cross. They served the local community, bringing aid and comfort to residents affected by fires and disasters. They also responded to natural disasters in the region, often traveling to the Southern US, Puerto Rico and Haiti. On 9/11/2001, they were a part of the initial Red Cross Team at Ground Zero. Mr. Sammel is survived by his five sons Richard, wife Mariane, David, Robert wife Mary, Andrew wife Mary, Thomas wife Linda. Mr. Sammel has 15 grandchildren Richard, Katherine, Julie, Amanda, Elizabeth, David, Jack, Grant, Jacqueline, Alison, Kathleen, Grace, Anna, Sabrina, and Andrew. Mr. Sammel is also survived by four great grandchildren. Clara, Samuel, Benjamin, and Margot. He is also survived by two brothers John and Roger. Mr. Sammel will be waked at the Yorktown Funeral Home on Friday, February 18th 2:00-4:00 pm and 7:00-9:00 pm. A funeral mass will be at Saint Patrick's Church in Yorktown Heights on Saturday, February 19th at 10:00 am. Following the mass, there will be an interment at the Amawalk Cemetery. In lieu of flowers, Mr. Sammel requests donations be made to the Franciscan Sisters of Peace, or the New York- Presbyterian Hudson Valley Hospital Emergency Department. In the memo section on the check please write "In Honor of Dick Sammel" Donations by check should be payable to: Franciscan Sisters of Peace And mailed to: Franciscan Sisters of Peace Development Office 20 Ridge Street Haverstraw, NY 10927 or New York-Presbyterian Hudson Valley Hospital Foundation And mailed to: Development Office New York-Presbyterian Hudson Valley Hospital 1980 Crompond Road Cortlandt Manor, NY 10567 Attention: Rebecca Eduardo

The family of Richard A Sammel created this Life Tributes page to make it easy to share your memories.

Send flowers to the Sammel family.