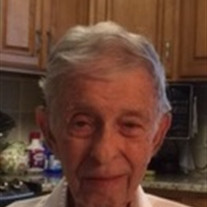 Richard G. Durant of Yorktown Heights, NY passed away on March 23, 2021. He was born on August 27, 1928 in Glenn Falls, NY to Leonard and Norma Durant. He is survived by his devoted wife Ann, his daughters Deborah and Bambi, sons-in-law Tor Osmundsen and James Tornatore, grandchildren Justin, Erik, his wife Lizzie, Robin and Scott, and great granddaughter Sonja Elise. Richard was the eldest of five children. He grew up during the great depression in Roswell, New Mexico, a town he forever loved and reminisced about. However, he would move many times in his life including to Ottowa, Canada, Connecticut and New York. He settled into the first house he ever owned in Yorktown Heights, in 1974, a home he never wanted to leave. Richard was a natural born teacher who was very dedicated to his students having taught for twenty seven years in the Mahopac Central School District. He was a passionate letter and essay writer, an avid reader, and enjoyed listening to music and watching movies from the 1930s and 1940s. He proudly served his country in the US Army and was honorably discharged in January of 1950; he was a strong patriot and loved the USA. Throughout the years, he played many sports and organized and coached many little league baseball and hockey teams; he loved working with young people. He was always a leader whether to his three younger brothers, teammates, players, co-workers, or family members. His life long goal was to be a good person and to inspire others to do likewise. He will be missed. Family and friends will honor the life of Richard on Friday, March 26, from 9:30am to 10:30am at Yorktown Funeral Home. Mass of Christian burial will follow at 11am at St. Elizabeth Ann Seton Church in Shrub Oak. Interment to follow at St. Lawrence O'Toole Cemetery in Brewster. In lieu of flowers, donations can be made to Hospice of Westchester or St Jude Children's Research Hospital.

Richard G. Durant of Yorktown Heights, NY passed away on March 23, 2021. He was born on August 27, 1928 in Glenn Falls, NY to Leonard and Norma Durant. He is survived by his devoted wife Ann, his daughters Deborah and Bambi, sons-in-law Tor... View Obituary & Service Information

The family of Richard G Durant created this Life Tributes page to make it easy to share your memories.

Send flowers to the Durant family.