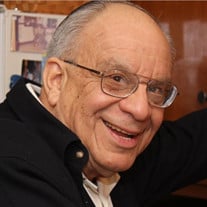 Ramon Esteban Martinez of Yorktown Heights passed away on Dec. 7, 2020. Ray was born in New York City, NY on Feb. 21, 1936 to the late Ramon Antonio & Christabel (Rifflard) Martinez. Ray grew up in Larchmont and graduated from St. Augustine's Grammar School. He attended Archbishop Stepinac High School for 2 years and then joined his mother when she moved to Reno, Nevada where he graduated high school. He joined the United States Army in 1954 serving honorably until 1957. When discharged, he had proudly reached the rank of Sergeant. Upon discharge, he returned to Westchester County, attended a broadcasting school in NYC and eventually moved down to St. Thomas and then to Puerto Rico where he was a radio announcer/disk jockey. He is known by family, friends and acquaintances for his soothing radio voice. Upon returning to Larchmont, he worked for Avis Car Rental as a local manager in Mt. Vernon, where he eventually met and married Marie Elena Carpiniello. They were married on October 7, 1967 in Sts. Peter and Paul Catholic Church in Fleetwood. Ray is remembered for his sense of humor and being the best host at their Yorktown Heights home at the annual gatherings of family and friends on Easter, the 4th of July, Thanksgiving, Christmas and New Year's Day, and was the life of every party. He loved relaxing and reading, but also enjoyed motor trips with Marie. For thirty years there were visits to New Hampshire where his Mom eventually settled, and it became their second home state, and there were vacation trips to Cape Cod, MA; Ogonquit, ME; Quebec City & Montreal; Pennsylvania; and Colonial Williamsburg, VA. The last being Marie and Ray's very favorite destination. Ray was devoted to his wife, Marie, and although they had no children of their own, they enjoyed the eight nieces and nephews of Marie's three siblings. As youngsters and teens Ray and Marie would take them to such places as Radio City for the Christmas Show, Lincoln Center to see the "Nutcracker", ice skating in Rockefeller Center, dinner and shows in the City, and the annual Twelfth Night at Van Cortlandt Manor with dinner afterwards. As adults, they still continued to enjoy lots of time together along with grand nieces and nephews. Uncle Ray loved being with all of them. Ray also loved their adopted dogs, Tuffi, Allie, Willie and Alaska, as well as Greystone, an outdoor a Blue Russian cat who stole his way into Ray's heart and home. Surely, Tuffi, Allie, Willie and Greystone are there in heaven to meet Ray. Ray, an only child, was predeceased by his parents and two sisters-in-law: Anna Marie Carpiniello and Annette Miserendino. He is survived by his wife, Marie, of 53 years; his brother-in-law and his wife, Richard and Suzanne Carpiniello, of Somers, NY; his brother-in-law William Carpiniello of Lyme, CT; brother-in-law Remus Miserendino residing in the Veteran's Home in Montrose, and , of course, his eight beloved nieces and nephews, their spouses and children.

The family of Ramon E Martinez created this Life Tributes page to make it easy to share your memories.

Ramon Esteban Martinez of Yorktown Heights passed away on Dec....

Send flowers to the Martinez family.