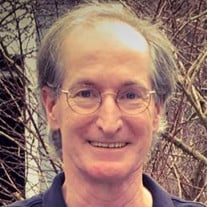 Peter L. Daly of Cortlandt Manor, New York, died surrounded by family and friends on Tuesday January 7, 2020. Born in Glen Cove, New York, and raised in Westbury, Peter was the eldest child of Robert L. Daly and Carol A. Butow. His parents pre-deceased him. Peter married Betsy Davis, a native of Elkhart, Indiana, at Sacred Heart Church in Dobbs Ferry, New York on May 1, 1993. Peter was a photographer by trade, working for Christie’s in New York City for over 20 years. In 1999, he retired from Christie’s to raise his children full-time and continued to do freelance photography. His work can be seen at http://peterdalyphotography.com. He was also the photographer for his son’s band, Dark After Dawn. Peter attended the Parsons School of Design and Pratt Institute. He also attended the University of Colorado where he served in the Navy’s ROTC program. In addition to his wife, Peter is survived by his beloved children: Gráinne of Brooklyn, New York and Conor of Cortlandt Manor. He is also survived by his brother Robert (Janine) of Antioch, TN; Michael (Waveney Klaiber) of Bellport, NY; Barbara of Mattituck, NY; and Suzanne Falchook (Frederick) of Milledgeville, GA; and his nieces and nephews. He was a parishioner at St. Elizabeth Ann Seton Catholic Church and a member of the Town of Cortlandt Planning Board and previously the Town’s Conservation Committee. Peter was an avid sportsman, and spent time hiking, rock climbing, target shooting and fly fishing in addition to restoring the family’s 1827 colonial farmhouse in Cortlandt Manor. Friends may visit with the family on Sunday, January 12, from 2:00-6:00 p.m. at Yorktown Funeral Home in Shrub Oak, New York. A funeral Mass will be held at St. Elizabeth Ann Seton Catholic Church on Monday, January 13, at 10:00 a.m. Donations in lieu of flowers may be made to mohonkpreserve.org or unitedforthetroops.org.

The family of Peter L. Daly created this Life Tributes page to make it easy to share your memories.

Send flowers to the Daly family.