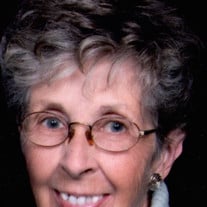 Pauline Mary Dougherty, a longtime resident of Yorktown Heights, died peacefully at home Oct. 3 after battling an extended illness with typical stubbornness and humor. She was 79. She was a devoted wife, energetic mother and impassioned grandmother, strong in her faith and convictions to the end. Known to family and friends as Polly, she was happiest at home where the Christmas tree stayed up well into January, where the supply of Peeps lasted until the following Easter and where family and friends gathered to celebrate life’s best moments. Her favorite chair was next to a rotary phone where she talked for hours to a vast network of friends. Pauline was born July 10, 1939 in Freeport, Ill. to Charles and Mildred Michel, attended St. Mary’s grade school and graduated from Aquin High School in 1957. She attended Marquette University and graduated in 1961 from St. Anthony’s Hospital School of Nursing in Rockford, Ill. She married Eugene Dougherty on May 11, 1963 and they spent the next 55 years side by side, in good times and bad. After working as an emergency room nurse at St. Anthony’s for two years, Polly became a proud stay-at-home mother. She also volunteered at St. Mary’s Catholic Church and later returned to work as the school secretary at St. Joseph’s. The family moved to New York in 1981 and she volunteered at St. Elizabeth Ann Seton School. She is survived by her husband Gene, her daughter Sheryl Scott and husband Steve of Cortlandt Manor, her son Mike and wife Donna of Brewster, N.Y. and her daughter Kathy and partner Beth Currier of Salem, Mass. along with grandchildren Courtney, Kevin, Kiera and Connor Scott, Andrew and Tyler Dougherty and Emma and Kelsey Currier-Dougherty. Visiting hours will be at Yorktown Funeral Home, 945 East Main Street, Shrub Oak, N.Y. from 4-8 p.m. on Sunday. There will be a Mass of Christian Burial at 10 a.m. Monday at St. Elizabeth Ann Seton Church, 1377 East Main St., Shrub Oak, N.Y. Interment will follow at Rose Hills Memorial Park in Putnam Valley. Polly was predeceased by her parents, sister Kathryn and brother-in-law Robert Kryder. In lieu of flowers memorial donations may be made to Make-A-Wish Hudson Valley in Tarrytown, N.Y.

Pauline Mary Dougherty, a longtime resident of Yorktown Heights, died peacefully at home Oct. 3 after battling an extended illness with typical stubbornness and humor. She was 79. She was a devoted wife, energetic mother and impassioned grandmother,... View Obituary & Service Information

The family of Pauline M. Dougherty created this Life Tributes page to make it easy to share your memories.

Send flowers to the Dougherty family.