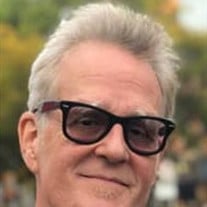 There will be a live stream on Sunday for Michael Winzig starting at 4pm https://client.tribucast.com/tcid/18577065 Michael Joseph Winzig ~ Mike, who was 68 years old, died peacefully at home on August 12, 2020. Mike was son of Francis T.... View Obituary & Service Information

The family of Michael Joseph Winzig created this Life Tributes page to make it easy to share your memories.

There will be a live stream on Sunday for Michael Winzig starting...

Send flowers to the Winzig family.