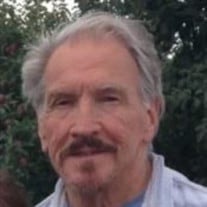 Michael James Hess of Cortlandt Manor passed away at his home on Dec. 12, 2020. Michael was born Nov. 18, 1940 in Brooklyn, NY to Charles & Catherine Hess. He served honorably in the United States Marine Corp. On Sept 3, 1961 he married Mary Napolitano. Michael's work history began with the F.W. Woolworth Corporation as a Manager's Trainee. He worked his way up to the Director of the Northeast and Caribbean regions. After leaving Woolworths, Michael held the position of President at Seedman's of Puerto Rico. After leaving that position, he held several executive positions in the retail industry before his retirement. After retirement Michael enjoyed playing golf, and participating in and watching sports. He was an avid sports fan and loved the Boston Red Sox. Michael loved to travel and visited many countries with his wife, Mary. When his children were younger they spent many seasons traveling up and down the east coast in a camper. This was a time where many precious memories were made. Michael was witty with a fun sense of humor, and was very popular and loved by the neighborhood kids. Michael had a charismatic personality and was able to strike up a conversation with anyone and made friends wherever he went. He loved animals with a particular fondness for strays and would often feed them. He is survived by his loving wife Mary. He has 3 daughters Melissa Trifoli (Frank), Melani Sessa (Ralph), and Mary Thompson; and 2 sons Michael (Sandy), and Marc (Jennifer). He is survived by 12 beloved grandchildren; Naomi, Nicholas, Leah, Josiah, Lauren, Stefanie, Antonio, Michael, Solomon, Lorenzo, Selah and Miranda. Predeceased by his son-in-law Kirk Thompson, and a brother and 4 sisters. In lieu of flowers, donations to K9 Partners for Life in memory of Michael Hess would be appreciated. The funeral service will be live stream at 10am with the following link https://client.tribucast.com/tcid/43220985

Michael James Hess of Cortlandt Manor passed away at his home on Dec. 12, 2020. Michael was born Nov. 18, 1940 in Brooklyn, NY to Charles & Catherine Hess. He served honorably in the United States Marine Corp. On Sept 3, 1961 he married Mary... View Obituary & Service Information

The family of Michael James Hess created this Life Tributes page to make it easy to share your memories.

Michael James Hess of Cortlandt Manor passed away at his home...

Send flowers to the Hess family.