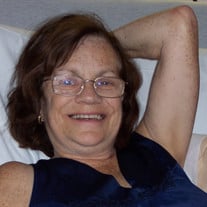 Mary Ann Lane Mattiola died peacefully on Dec. 26, 2019 at Hudson Valley Hospital surrounded by her husband and three daughters, having lived and loved for 82 wonderful years. She was born Oct. 31, 1937 in New York City to John Fraher and Margaret Creehan Fraher. Mary Ann grew up in the Washington Heights section of Manhattan where she attended Mother Cabrini School, and St. Elizabeth's Roman Catholic Church. At Mother Cabrini, she met many of the women who would remain her lifelong friends. Mary Ann lost her father when she was just five years old, and she and her brothers, Jack and Gene, were raised by their widowed mother and by their grandmother who was very involved in their lives. As a young woman, she met William Lane and they were married when she was 20 and he was 21. A year later, they had their first child, Ellen, and Jeannine and Laura followed shortly thereafter. During her lifetime, Mary Ann endured numerous hardships but never bowed. Her tremendous faith in Jesus Christ and her devotion to the Blessed Mother were the bedrock of her existence. She also was blessed with great joy and a family that mattered more to her than anything else on this earth. For Mary Ann's 75th birthday, friends and family were asked to describe her in three words. Loving, faithful, generous, giving, strong, independent, determined, smart and funny were the words most often used. One of the great joys of her life was marrying her lifelong friend, Francis Mattiola, and sharing the last two decades with him. Together, Frank and Mary Ann had many adventures, traveling to Alaska and visiting family and friends across the country. They enjoyed dancing, traveling, going to the races and spending time with family. They were always present at little league games, music recitals, art shows, plays and graduations for their grandchildren. Until Mary Ann's health faltered, she attended daily mass with Frank at St. Columbanus. Frank was the love of her life. She was an incredibly independent and resourceful woman. When the walkway needed tending, she got a book on masonry from the library and mixed the cement herself. When the house needed painting, she climbed a ladder and painted it. When her daughters had proms and formal dances, she worked two jobs to earn the money for the fancy dresses she wanted them to have. At the New York Athletic Club where she worked for her entire adult life, she rose from a switchboard operator using an old-fashioned board with plugs to the Chief Operator who researched computerized communication systems and chose the vendor for the Club. Making the transition to computerized communications required her to attend a school where she was the only woman, and the only person without a college degree, to master the complexities of the system. Mary Ann loved completely, without reservation. Her love was fiercest for her daughters who had her unconditional support. But she also gave of her time, her prayers and her material possessions to anyone in need. She assisted young people in need of a place to live, newcomers to this country, families beset by illness. She never sought acknowledgement for these acts of kindness and charity and would brush off any suggestion that she was deserving of praise for them. Mary Ann is survived by her loving husband, Francis Mattiola; her daughters Ellen Lane and her husband, Kieran O'Leary; Jeannine Lane and her husband, James Kane; Laura Monaghan and her husband Michael; her grandchildren Juliann Kane; Jacqueline Kane and her partner, Arthur Zegers; Conor, Liam and Meghan O'Leary; and Michael and Stephanie Monaghan; and her great grandson, Arthur Zegers. She was predeceased by her first husband, William; her brothers, Jack and Eugene Fraher; and by her sister-in-law, Julia Lane.

Mary Ann Lane Mattiola died peacefully on Dec. 26, 2019 at Hudson Valley Hospital surrounded by her husband and three daughters, having lived and loved for 82 wonderful years. She was born Oct. 31, 1937 in New York City to John Fraher and Margaret... View Obituary & Service Information

The family of Mary Ann Mattiola created this Life Tributes page to make it easy to share your memories.

Send flowers to the Mattiola family.