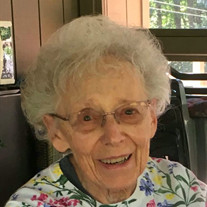 Marilyn Volkmann Olmsted passed away peacefully on April 24, 2020 at the age of 91. Mrs. Olmsted was a resident of Yorktown and a communicant at Saint Patrick's Church for over sixty years. Marilyn was born in Peekskill, New York on June 19, 1928 to Gertrude Purdy Volkmann and John Volkmann. Though she was an only child, she was surrounded by many aunts, uncles, and cousins on both sides of the family. She graduated from Peekskill High School in 1946 and Berkeley Secretarial School in New York City in 1947. Following graduation, she worked as a secretary for Creed's Lumber in Peekskill. On September 24, 1950, she married her high school sweetheart, Joseph Olmsted. After his tour in the Army in Germany, the couple moved to upstate New York so Joe could work for his father's construction company. They returned to Westchester in 1958 with their daughter, Nancy, and built a house in Yorktown before the birth of their second daughter, Joanne. Marilyn took great pride in her home and her children. She was active in the PTA and Girl Scouts, but she was best known for her beautiful sewing and handcrafts. She sewed everything with such love and care and was always impeccably dressed with carefully chosen jewelry and shoes to complement her custom-made outfits. She was an avid reader and also enjoyed walking the Rail Trail with the family, doing Word-Find, jigsaw puzzles, identifying birds at the feeder, and sitting with her beloved cat on her lap. After the death of her husband in 1992, she maintained her home and independence and could often be seen mowing her enormous lawn with a push mower, or shoveling snow from her driveway. In her later years she moved in with her daughter Joanne's family. She was a proud and active grandma who thoroughly enjoyed spending time with her children and grandchildren, and never missed a school concert, graduation, birthday celebration, soccer game, or a track meet. She was lovingly known by her granddaughters and their friends as "Ma" and was a surrogate grandmother to many. Her quiet presence and positive attitude brought joy to those around her. Her cherished charm bracelet, a gift from Joe, traced the many happy events and memories in her life. Her first charm, which was a wedding ring, signified the start of married life. Additional charms commemorated the completion of their home, the birth of their girls, and many other family milestones. She was always eager to wear it and to explain the significance of each charm. One of her favorite songs was, "You are the Wind Beneath My Wings". Never one to stand out in a crowd, Marilyn was a humble force content to support her family and provide them with the encouragement necessary for them to achieve their goals and dreams. Her loss will be profoundly felt. Mrs. Olmsted is survived by her daughter and son-in-law, Joanne and Arthur Bartosch of Yorktown; and two granddaughters, Michelle and Nicole Bartosch. She is also survived by her daughter, Nancy Serson of Valley Falls; two grandsons, Joseph (Christina) and Matthew Serson; and two great-grandchildren, Darryl and Ariana Serson. A private funeral will be directed by Yorktown Funeral Home in Shrub Oak. A mass of remembrance will be celebrated at St. Patrick's Church at a later date. In lieu of flowers, the family would appreciate donations to The American Lung Association or The Alzheimer's Association.

Marilyn Volkmann Olmsted passed away peacefully on April 24, 2020 at the age of 91. Mrs. Olmsted was a resident of Yorktown and a communicant at Saint Patrick's Church for over sixty years. Marilyn was born in Peekskill, New York on June 19,... View Obituary & Service Information

The family of Marilyn Olmsted created this Life Tributes page to make it easy to share your memories.

Send flowers to the Olmsted family.