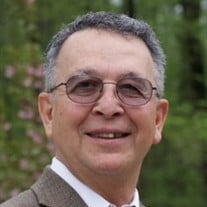 Kenneth Jewett Brown, Jr. of Mohegan Lake, New York, son of Kenneth J. Brown, Sr. and Eleanor (Mastro) Brown returned to his Lord on the evening of March 8, 2021 after a courageous and sustained cancer battle. Wake services will be Wednesday, March 10, 2021 from 2-4pm and 7-9pm at Yorktown Funeral Home. The Mass of Christian Burial will be held on Thursday, March 11, 2021 at 10:30 am at the Church of Saint Elizabeth Ann Seton in Shrub Oak, New York. Burial will follow at Assumption Cemetery. Raised in Yonkers, NY, Ken attended Saint Barnabas parish and Blessed Sacrament High School in New Rochelle, NY. He attended Iona College, Class of 1964. He received his Masters in History from Fordham University. Ken married his beloved wife, Gerarda (Keating) on July 24, 1965 at Saint Barnabas. Gerarda was the love of his life, and he never let her forget that. In 1968 the couple moved to Yorktown and soon thereafter took residence at Ivy Road where Ken would reside until his death. Ken worked in Education first as a truant officer in Harlem, NY, later as a Social Studies teacher at Mahopac Junior High, and finally as an Attendance Teacher for the New York City Board of Education. Ken was a trusted master plumber and the owner of Kenny’s Plumbing and Heating. Ken was an active parishioner of Saint Elizabeth Ann Seton since 1969. His children attended Saint Elizabeth Ann Seton school. Ken served many years on the Parish Council and Men’s Ministry as well as for committees such as Buildings and Grounds. Always the teacher, Ken shared his Catholic faith assisting in the Right of Christian Initiation for Adults program. Ken had a heart of service and was committed to the poor and to the pro life cause. He fervently supported racial justice and educational opportunity, especially in his roles as an educator working with inner city children. He volunteered with Gerarda fostering newborn babies for Catholic Charities. His pride and joy were his children and his grandchildren, and Ken managed to be loyally present in their lives even amidst the struggles of his illness. Ken is affectionately remembered for calling his home “Club Brown”; it was here that he welcomed family and friends and hosted many large gatherings, where he delighted in leading songs on the horn or piano. Ken was a brave patient who fought prostate cancer for over 25 years with an indomitable spirit. His remarkable outward joy stemmed from a deep faith in God and his total devotion to his wife. Ken is survived by Gerarda (Keating), his wife of 55 years and children Kenneth J. Brown, III (Audra), Regina Kaishian (James), Susan Galvao (Antonio), Jennifer Kim (Chang Soo), Maryanne Harkins (Michael), Stephen Brown (Maura), Elizabeth Martinez (Ernesto), Monica McDaniel (Stefan) and Kateri Stewart (Zachary). Ken’s legacy includes 43 grandchildren and 2 great-grandchildren. He is also survived by his 5 siblings, Dennis, Jerome, Stephen, Douglas, Therese, beloved brothers-in-law and sisters-in-law and many nieces and nephews.

The family of Kenneth J. Brown Jr. created this Life Tributes page to make it easy to share your memories.