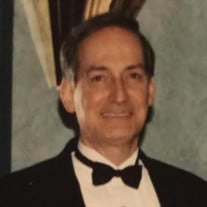 Joseph “Sonny” Cocchia, 87, entered into eternal rest on Sunday, July 21, 2019, surrounded by his family. He was born on March 3, 1932 in Brooklyn, New York. He was preceded in death by his parents Margaret Collora Cocchia and Nunzio Joseph Cocchia, as well as his sisters Constance, Mary, Josephine, Rose, Carmella, Cecilia, and brothers August and Genaro Cocchia. Joe lived in Brooklyn for 60 years, then moved to Yonkers in 1992 when he married Elizabeth Dombrowski Cocchia, his wife of 27 years. Joe and Liz enjoyed being “snowbirds” and split their time between East Stroudsburg, Pennsylvania and West Palm Beach, Florida. He is survived by his wife, Elizabeth and children Brian Cocchia, Tara Cocchia Pistar (Nezih Pistar), and step-son, Alfred Esposito (Pauline Esposito), and grandchildren Al Esposito, Samantha Little Danner (Kevin Danner), Shannon Esposito, and Nicholas Little and sister Margaret Duffy. Joe was a beloved uncle to many. Joe worked for the New York City Transit Authority for over 20 years in the Armored Car Division. He was an avid bowler and a lover of baseball, especially his beloved Yankees. He also enjoyed growing his tomato and basil plants. Most of all, he loved making eggplant parmesan for his friends and family. Visiting hours will be held at Yorktown Funeral Home, 945 East Main Street, Shrub Oak, NY, on Thursday, July 25, 2019, from 4:00 pm - 8:00 pm. There will be a mass of Christian Burial on Friday, July 26, 2019 at 10:00 am at The Church of The Holy Spirit, 1969 Crompond Road, Cortlandt Manor, New York. In lieu of flowers, donations can be made to St. Jude Children's Research Hospital or Greyhound Rescue of New York.

The family of Joseph Cocchia created this Life Tributes page to make it easy to share your memories.

Send flowers to the Cocchia family.