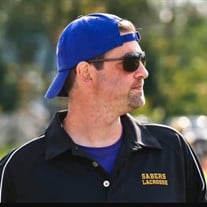 It is with deep sadness that we announce the unexpected and sudden passing of our beloved son, Jonathan Egan Salch. Jon was born on November 19, 1976 in Mt. Kisco, NY to Catherine (Egan) and Edward Salch. He grew up in Peekskill and Shrub Oak NY, graduating from Lakeland High School in 1994. Jon was a standout athlete who achieved great satisfaction and success on the football and lacrosse fields. He went on to play lacrosse at Nazareth College and graduated from Towson State University with a degree in Sport Studies and Communication. Jon continued to pursue his passion for athletics by becoming a Phys Ed teacher and Coach. He completed a Master's degree in Education at Mercy College, and continued his Graduate studies in Physical Education at Manhattanville College. Jon began his teaching career at P/NW BOCES and his coaching career as Assistant Lacrosse Coach at Briarcliff HS. He then relocated to NH where he taught Health/Wellness/Phys Ed at Bedford High School. Throughout his 10 years in NH, Jon touched the lives of many students as a teacher, mentor, and coach. He was incredibly proud of his students and continued to follow and cheer on their accomplishments long after graduation. Jon was an outstanding coach who was known for his "high lax IQ" and success on the field. He took tremendous pride in the many awards, tournaments, and state championships his teams won throughout the years. Jon had great respect and gratitude for his own coaches and mentors who helped shape his philosophy and life-long values, especially Coach Frank Vitolo and the LHS staff, Bridgeton Academy Coach Michael Fuller, Coach Scott Nelson from Nazareth College, and Chris Cameron, head coach at Bishop Guertin High School and founder of the NH Tomahawks. Jon is survived by his parents, sister Jessica and partner Michael McBride, brother Rory and wife Elizabeth Sweeney, nephews Tyler McBride and Logan Salch, maternal grandmother Regina Egan, as well as a large and loving family of aunts, uncles, and cousins. Jon also had a huge network of friends from high school, college, teaching, and coaching that he loved dearly, especially Brian, Rich, Keith, Brad, the Baltimore boys, and many others. Jon cherished spending time with his family and friends and was inevitably the life of every get together. He had a terrific sense of humor and was always a lot of fun to be around. Jon was deeply loved by many and will be terribly missed by all. Due to the current pandemic, burial services will be private. A memorial will be held at a later time when we can all come together to celebrate Jon's life.

It is with deep sadness that we announce the unexpected and sudden passing of our beloved son, Jonathan Egan Salch. Jon was born on November 19, 1976 in Mt. Kisco, NY to Catherine (Egan) and Edward Salch. He grew up in Peekskill and Shrub Oak... View Obituary & Service Information

The family of Jonathan Egan Salch created this Life Tributes page to make it easy to share your memories.

It is with deep sadness that we announce the unexpected and sudden...

Send flowers to the Salch family.