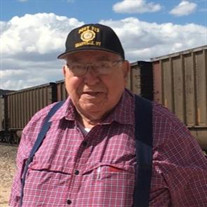 Jack Forgacs of Granville, NY - John Leo "Jack" Forgacs, age 91 passed away on February 25, 2021. Jack was born on July 23, 1929 in Staten Island, NY the only son of John E. Forgacs and Dorothy Veronica Voges Forgacs. At an early age, the family moved to Gilboa, NY. Jack grew up hunting, fishing, hiking and camping in the Catskill Mountains. In school he was active in Boy Scouts, band, chorus, basketball, baseball, cross-country running, dramatics, and public speaking. After high school Jack attended Syracuse University then transferred to Siena College, living with his parents in Schenectady. While there he was a member of the South Schenectady Fire Dept. and Ambulance Co. and played in the Fireman's Softball League several years. Jack worked at St. Clare's Hospital nights for a year then worked Security and Operations at the 139th Fighter Squadron nights until after graduation. In 1951 he joined the K of C, became a 4th Degree Knight and later was Grand Knight. After graduation he entered the U.S. Army as an Artillery Lieutenant serving at Ft. Sill, Okla. And in Occupied Germany in 155mm Armored Artillery. Returning home, he worked for ATTandT in White Plains as a project engineer on telephone buildings, towers, and underground structures. On May 4, 1957 he married Ann Mary Judge of Croton-on-Hudson at Holy Named of Jesus Roman Catholic Church. During the next few years Jack commanded a 155mm Artillery Battery that was the most outstanding unit in the 77th Division Artillery. From there he joined a U.S.A.R. staff headquarters where he taught Command and Staff College, the Industrial College of the Armed Forces, Industrial Management. He also was Director and taught the Air College non-resident course. He taught Bn. Survey Courses to the 77th DivArty as well as an Air Observer/Intelligence course. After 10 years of building many above ground and underground complexes, towers and antenna systems Jack left ATandT and became involved in Nuclear Power Plant construction at Indian Point Units 2 and 3 in Montrose, NY as the Cost Engineer and Estimator for the next 5 years. During this time, his family was growing with Theresa Ann being born in 1958, Patricia Marie in 1959. Thomas William in 1960 and Andrew Joseph in 1961. John Kevin was born in 1963 and Stephen Arthur in 1966. Adirondack Camping was enjoyed with Ann's parents and to various military posts to see the local sights an history enroute while dad studied each summer. Jack was active in Holy Spirit Parish teaching CCD on Parish Council. Marriage Encounter and Cursillo and a Eucharistic Minister to the local hospital. He was a Cub Scoutmaster for several years in both New York and Pennsylvania. In the late 1960's two daughters were born, Karen Eileen in 1969 and Mary Margaret in 1972. In 1971 he joined Ebasco Services and worked in Pennsylvania and then to Princeton Plasma Physics Lab to organize and develop costs and schedules for a Tokomac Fusion Reactor. Once the program was up and running, he returned to New York and the World Trade Center No. 2 working on schedules and costs for various nuclear and fossils in the USA and Mexico. White at WTC# 2 he became a Competent Toastmaster and was voted the Most Outstanding Speaker in 1985 in the World Trade Center. During this time Jack also taught Cost Engineering and Scheduling Seminars at the Center for Professional Advancement in New Jersey. As an adjunct Professor for Pratt Institute, Brooklyn, featuring "Hands on" training in Project Management to select city groups. In 1980 Jack retired a Lt. Colonel in the Army over 27 years, 5 months, and 4 days of service. In 1987 Con Edison acquired Jack as a consultant from Ebasco for Indian Point No2 Nuclear Generating Station. In 1996 Jack retired and moved to Granville. Since moving here he became active in the K of C. Also, as a Eucharistic Minister at St. Mary's Church. He was active in American Legion Post 323 as Finance Officer, Chaplain, Color Guard, Oratorial Contests in Granville and Hartford High Schools and Scholastic Achievement awards at both Schools And active in community functions, especially around Christmas Time. After spending over 32 years camping at Brant Lake Ann and Jack then spent most of their summers at home in Granville. He has four grandchildren, Christopher, Ryan, Jack, and Jordan.

The family of John Leo Forgacs created this Life Tributes page to make it easy to share your memories.

Send flowers to the Forgacs family.