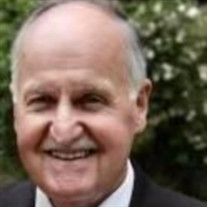 John “Jack” Francis Foley born January 1937 in Geneva, NY to Gladys Latourette and Francis X Foley. At the age of three, the family moved to Gloversville, NY. Jack graduated from Gloversville High School in 1955. Jack went on to graduate from the Albany Business College and then the Academy of Funeral Services in NYC. Jack was employed for forty years with the Riverside Memorial Chapels of New York and Westchester, as a licensed funeral director, retiring in January 2000. Jack also served in the United States Army, in the early to mid 1960’s, having been Honorably Discharged, Sergeant John F. Foley in 1966. On June 26, 1971 Jack married Marion Jean Kelleher at Saint Nicholas of Tolentine Church, in the Bronx, NY. A year later they moved to Yorktown Heights, Westchester County, to raise their family. They also maintained a seasonal residency at The Great Sacandaga Lake. Together with his beloved wife of 49 years he has enjoyed their international travels and cruises, attending various classical music performances of choral, opera and ballet, and viewing and listening to broadcasts and recordings. Jack is also survived by devoted sons Dr. John S., Justin (ToniAnn) and Jordan all of Yorktown, NY. Daughters Jessica (Jason) Swart, of Yorktown, NY and Jacqueline (Eric) Kline of Austin, TX. His dear twin sister Jane Pollak (Louis) of Johnstown, NY. Nine cherished grandchildren and many nieces and nephews. Pre-deceased family members, besides his parents, are son Jason W. and sisters Nancy A. (aka Sister Maria Xavier C.S.J.) and Mary Ambridge (Thomas). In lieu of flowers the family asks that donations be made to the Westchester BLUE Foundation. “The Westchester B.L.U.E. Foundation (Brothers in Law Enforcement Uniting Efforts) was formed for the charitable purpose of aiding police officers and their families in Westchester County in crisis, who are dealing with a tragedy, death, illness, substance abuse, emergency or in financial need by referring them to counseling, psychiatric, medical and social providers or facilities that will address their specific needs.” PO Box 787 Port Chester, NY 10573 or www.westchesterblue.org

The family of John "Jack" Foley created this Life Tributes page to make it easy to share your memories.

Send flowers to the Foley family.