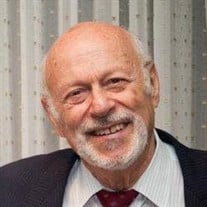 Jerome S. Thaler, formerly of Yorktown Heights, passed away in Yonkers, NY on Saturday, October 19, 2019 after a brief illness. Jerome is survived by his son Daniel (Susan), daughter Naomi (Barry) Volain and son Jonathan (Helen); stepdaughter Rebecca Schram Zafrany and stepson Mordechai Schram; grandchildren Rebecca Thaler Heineman, Diane Ruby Thaler, Noah Volain, Mark Volain, Maximus Thaler, Anna Volain Jones and great-grandson Jude Heineman; and by Eleanor Arnold, his loving partner of 22 years. He was preceded in death by his parents, Herman and Clara (nee Hirsch), his first wife Diane (nee Perin) and his brother, Allan (Susan). Jerome was born on January 10, 1930 in New York City. He earned a B.S. and an M.S. at Columbia University and a Doctor of Optometry degree at the Massachusetts College of Optometry. He was a U.S. Army veteran, who served in Alaska during the Korean conflict from 1954 to 1956. He opened his own optometry practice in Peekskill in 1959 and had a practice in Mahopac for nearly 40 years. He served as Chief of Optometry at the V.A. Hospital in Montrose from 1981 to 1992. He continued to practice into his 80s. Dr. Thaler was a prominent climate historian of the Hudson Valley, maintaining a National Weather Service station at his home in Yorktown for 50 years. He authored a number of books on the subject, including The Westchester Weather Book, Weather History and Climate Guide to the Lower Hudson Valley and Hudson Valley Warming. His writings appeared in Hudson Valley Magazine, The New York Times and many local newspapers. He received several awards for his service and contributions to the climatology of the Hudson Valley. He was an ardent amateur geologist, naturalist and astronomer, who traveled widely and loved music and the theater, especially the works of Gilbert & Sullivan. He was also an avid swimmer and outdoorsman. A memorial service will be held on Friday, October 25 at 11:00 am at Yorktown Funeral Home, 945 East Main Street in Shrub Oak, NY. Memorial contributions may be made to the Union of Concerned Scientists, 2 Brattle Square, Cambridge MA 02138-3780 or uscusa.org.

The family of Jerome S. Thaler created this Life Tributes page to make it easy to share your memories.

Jerome S. Thaler, formerly of Yorktown Heights, passed away in...