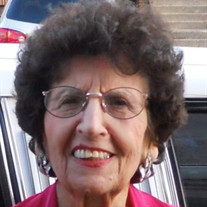 Jennie Romano, passed peacefully in her sleep on the evening of Tuesday January 4, 2022, at the age of 102. She was born in Yonkers on September 28, 1919, to Italian immigrants Michelangelo Zema and Catherine Saraceno. Jennie was the eldest daughter of six children and the matriarch of her family as her mother passed at a young age. Jennie was very bright and graduated with honors after skipping grades and finishing high school at the age of 16. She had to forego college because of the depression and worked tirelessly in her father’s family business, a grocery store, in the Bronx. She later became a bookkeeper. After WWII ended, she married Alphonse Romano, a Bronze Star medal of honor recipient. They started a family and raised two daughters Karen and Marie. Jennie inspired her children to become avid readers, as she loved her mysteries and kept her brain sharp completing crossword puzzles, watching Jeopardy and winning Wheel of Fortune every night. When Al became disabled with multiple sclerosis, she cared for him in every way possible until he entered the Veterans Hospital in Montrose, where he lived for 16 years. Ironically Jennie spent the last two years of her life at the New York State Veterans Nursing Home in Montrose a few hundred yards from where she regularly visited her beloved Al until his death in 1987. Jennie lived with her daughter Karen and her “son,“ Wayne and their family for 38 years at their home in Shrub Oak. She carried on her traditions of reading to the children devoting herself to her family and baking her famous cookies. She was a woman of deep faith, active member, and longtime congregant at St. Elizabeth Ann Seton where she will have her funeral mass. Jennie is survived by her daughter Karen and son in law Wayne Fedorczak and her daughter Marie DiNardi. She is also survived by her four beloved grandchildren, Brian Fedorczak (Lisa), Gregory Fedorczak (Maria), Carly Saviano (Frank), and Rachel DiNardi. She will be missed by her four great grandchildren Frankie, Ella, Gianna and Cole. Jennie was loved and respected by her family and friends as a kind, loving woman who never had an unkind word. On her 100th birthday she told her granddaughter that she retained her youth well into her 90s because she never had hatred in her heart. She will remain forever in our hearts. “What we have once enjoyed and deeply loved, we can never lose, for all that we love deeply becomes a part of us.” Helen Keller Due to Covid concerns the visitation on Tuesday will be private for family. All are welcome to go to the funeral mass and cemetery.

Jennie Romano, passed peacefully in her sleep on the evening of Tuesday January 4, 2022, at the age of 102. She was born in Yonkers on September 28, 1919, to Italian immigrants Michelangelo Zema and Catherine Saraceno. Jennie was the eldest... View Obituary & Service Information

The family of Jennie Romano created this Life Tributes page to make it easy to share your memories.

Jennie Romano, passed peacefully in her sleep on the evening...

Send flowers to the Romano family.