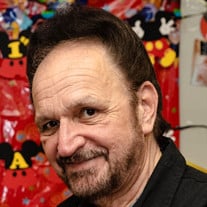 James P. Hunter Sr. of Queensbury, NY passed away on March 4, 2021. James was born on March 2, 1947 in Yonkers, NY to William and Grace Hunter. James married the love of his life Kathleen Monaco on October 11, 1970. James attended Sacred Heart grade school, then graduated Gorton High School in Yonkers, NY and then attended Westchester Community in Valhalla, NY. He served honorably for the United States Army. James & his wife Kathleen built a house in Yorktown, NY in 1975 and raised their family there for 40 plus years until they retired to their home in Queensbury, NY. James worked for 25 years for Finest Super Market as Shop Stewarts for Union 464A. James was an Elvis Presley aficionado and a judge for Tribute Festival Rocks where he and his wife judged all over the country including Brunswick, Georgia – Memphis, Tennessee - Ocean City, Maryland and Lake George, NY. James also loved Billy Joel and would attend many of his local concerts. One of his greatest loves was classic cars. James, alongside his childhood best friend Johnny, ran Emerald Car Club for many years in Yonkers, NY. James and Kathleen are members of Coopers Cave Car Enthusiast where they both participated in good Samaritan activities. They hosted classic car shows at various nursing homes. They also attended classic car shows all over the east coast, including The Adirondack Nationals, a huge classic car event, which is held every year at Lake George, NY. James and Kathleen own a mint condition 1972 El Camino which they are so proud of. Between the several Elvis Presley events and Classic Car shows they have made many lifelong friends. James would do anything for his family. He was a baseball coach for his son, a girl scout troop leader for his daughter, and would do anything for his children’s friends. James had the absolute biggest heart. You needed a friend and James was there, no questions asked. One of the proudest moments in James’ life was when he became a Poppy, he absolutely adored his grandson Maverick. James will always be remembered as a wonderful, loving and compassionate man. He is survived by his devoted wife Kathleen, loving children James Jr & Kimberly, son in law Jason and his cherished grandson Maverick James. Family and friends will honor the life of James Sr. on Friday from 2 to 6pm at Yorktown Funeral Home. Mass of Christian burial will be held on Saturday at 10am at St. Patrick's Church. Interment to follow at Assumption Cemetery.

The family of James P Hunter Sr. created this Life Tributes page to make it easy to share your memories.

Send flowers to the Hunter family.