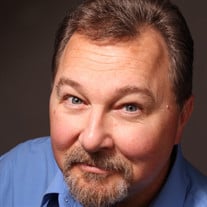 A celebration of Jim's life will be held at The First Presbyterian Church in Yorktown in the near future. James Raymond Gerth of Shenorock, NY passed away on January 18, 2022. Born on February 6, 1955 in White Plains, NY to the late William and Joan Byrne Gerth. He was raised in West Harrison, NY and attended Archbishop Stepinac H.S. graduating in 1973, and received a Bachelor of Fine Arts, Summa Cum Laude from Adelphi University 1977. He is survived by his wife of 41 years, Karen Sorensen Gerth, son Michael James Gerth, sister Janet Prince (husband Rick) of Nashville, TN, and brothers Robert Gerth (wife Janet) of Amelia Island, FL and William Gerth (wife Judy) of Trumbull, CT. A lifelong Westchester resident, James spent his life as a true Renaissance Man, excelling in the Performing Arts, Communication Skills Coaching, structural design and construction. To his many friends and fans, he was a brilliant actor and performer first. His acting career highlights included the Broadway musical, My Favorite Year at Lincoln Center (understudy to Tim Curry as Alan Swann), the international Tour of My Fair Lady (understudy to Noel Harrison as Professor Higgins), and starred as Don Quixote in a US/Canadian tour of Man of La Mancha. He also starred in two Off-Broadway musicals, On the Air and Madison Avenue. His title roles in regional and stock theaters include Man of La Mancha, The King and I, The Music Man, Pal Joey, Scapino, Jesus Christ Superstar, and The Wizard of Oz. Jim also toured his one-man Mark Twain show throughout the tri-state area for many years. Off-stage, Jim was in high demand as both a Technical Director, Stage and Facility Manager, Master Carpenter, and Shop Supervisor. Among the many places his talents were on display: Westchester Broadway Theatre, Eclipse Theatre Company, Yorktown Stage, Taconic Opera, Northern Westchester Center for Arts, Rise of the Jack O’Lanterns, Brown Paper Bag Video Productions and G & G Scenic. He also played a part in the founding of several regional theaters, including The Mahopac Farm Playhouse, and Yorktown Stage. In later years, Jim went on to a career as a Communications Coach in a global capacity for CommCore Communications Strategies, where, as a Senior Communications Consultant he traveled the world to moderate medical advisory boards, deliver communications training and messaging to physicians and executives in a wide range of industries. Most recently, The First Presbyterian Church of Yorktown brought Jim in to consult on needed work around the facility and found himself as the new caretaker to help oversee renovations and maintain this historic church. Memorial Gifts in Jim’s name may be sent to The First Presbyterian Church of Yorktown 2880 Crompond Road Yorktown Heights, NY 10598, in support of the Food Pantry that serves our local community in need. A Celebration of Life will be held April 2, 2022 at 2:00pm In memory of James Raymond Gerth First Presbyterian Church of Yorktown 2880 Crompond Road Yorktown Heights, NY 10598 Reception immediately following in Fellowship Hall

A celebration of Jim's life will be held at The First Presbyterian Church in Yorktown in the near future. James Raymond Gerth of Shenorock, NY passed away on January 18, 2022. Born on February 6, 1955 in White Plains, NY to the late William... View Obituary & Service Information

The family of James Raymond Gerth created this Life Tributes page to make it easy to share your memories.

A celebration of Jim&#39;s life will be held at The First Presbyterian...

Send flowers to the Gerth family.