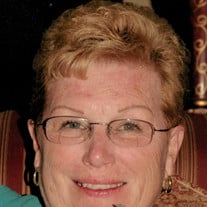 Inge Russo, a resident of Peekskill New York, passed away on February 5th 2022. Inge was born in 1936 to Wilhelm and Frieda Gruber in Darmstadt, Germany. Her beloved father Wilhelm Gruber was declared missing in action during World War II and presumed deceased. She, her brother Wilhelm, and mother Frieda immigrated to the USA afterwards with her new step father, Eugene Lopez. She proudly settled into America, in the City of Yonkers. She enjoyed her first job at Allstate Insurance Company in Harrison, NY. Even though she enjoyed her time at Allstate, she always wanted to work in her first passion which was food service. Inge went on to marry her 1st husband, Joseph Petranchik in 1955. It was with Joseph that she had three children: Michelle, John and Karenlynn. In 1982 she and Joseph divorced and Inge continued life as a single mother, working at St. Joseph's Seminary as the Food Services manager. Inge eventually left the Food Service Industry and worked for the New York State court system in White Plains, NY. It was there that she met the love of her life, Arthur Russo. After a brief courtship she married Arthur in 1984. This marriage merged Inge's three children and Arthur's two sons, Carl and Paul. Together the new family settled into Cortlandt Manor, NY where they lived for many years until a final relocation to Peekskill, NY in 1996. It was here that Inge and Arthur spent their remaining cherished years together with their precious fur baby, Sheera. In her later years, Inge enjoyed volunteering at the New York Presbyterian Hudson Valley Hospital gift shop. She loved meeting the many interesting people that crossed her path and forming new friendships (everybody was her friend). In her spare time she enjoyed cooking and baking for her friends and family. She especially liked teaching her children how to cook her famous German recipes. Inge never forgot her homeland and spent many years enjoying the Oktoberfest festivities at Hunter Mountain, NY. She would often recall to her children and grandchildren the wonderful childhood she had in pre-war Germany with her family, especially the mischief that she and her brother (Willy) would get into. She had a passion for travel and spent many years with Arthur traveling the world together and showing Arthur her beloved Germany through her eyes. Inge is survived by her son John Petranchik (Debbie), her two daughters, Karenlynn Weiss (David), Michelle Reilly (Bill) and her sister Stella Deeds (David). She is also survived by her two stepsons Paul and Carl Russo. Inge is also further survived by her loving grandchildren, Kristen Verhey (Tim), Kaitlyn Chapeton (Johnny), Kaylie and Bret Weiss, Amanda Varon (Josh), and Kim Hentze (Patrick). She is predeceased by her beloved husband Arthur, her brother Wilhelm Lopez and brother-in-law David Deeds. Friends and family may call at the Yorktown Funeral Home, 945 East Main Street, Shrub Oak, New York on Wednesday from 4 to 8pm. A mass will be celebrated on Thursday at 10:15AM at Holy Spirit Church 1969 Crompond Road Cortlandt Manor New York.

Inge Russo, a resident of Peekskill New York, passed away on February 5th 2022. Inge was born in 1936 to Wilhelm and Frieda Gruber in Darmstadt, Germany. Her beloved father Wilhelm Gruber was declared missing in action during World War II and... View Obituary & Service Information

The family of Inge Russo created this Life Tributes page to make it easy to share your memories.

Inge Russo, a resident of Peekskill New York, passed away on...

Send flowers to the Russo family.