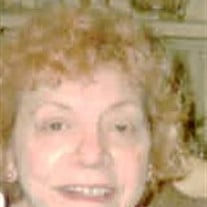 Gloria DiPasquale passed away on June 2, 2021, from cardiac/respiratory failure, three weeks after having turned 95. Gloria was born in Manhattan, NYC, on May 12, 1926. She was the fourth of eight children born to Rose and Michael DiPasquale, and she was the middle sister of a triumvirate of 3 girls born just 15 months apart. These three brought each other up, as close friends learning from each other while also helping in the caring of their three younger siblings. Gloria spent her growing-up years in the family home in the Bronx, where she began her lifelong, skilled mastery of dressmaking and tailoring at Jane Addams High School. She briefly worked in a downtown Manhattan couturier shop, but did not make this a career choice but rather a skill that lasted her all of her life. Gloria’s keen, sharp mind made her an early learner of pre-computer accounting skills, which led to her career as a key punch operator in the accounting offices of Revlon Corp., based in Edison NJ. This led her to move to NJ while driving on weekends back to the family home in the Bronx during most of her long life. It would be a mistake to think that Gloria never had any children. In truth, every one of her nieces, nephews, grandnieces and grandnephews were adored by her and remembered by her, usually very generously, on every birthday, at Christmas, and at important milestones and achievements in their lives. No parent was more proud of them than was their Auntie Gloria. Gloria’s skill as a dressmaker was far-reaching. She taught all her sisters the intricacies of sewing and tailoring, fabrics and styling. For the wedding of her brother Jimmy to Rose Pontecorvo she made the exquisite dresses worn by the women in her family. When her baby sister Anna married Angelo Teristi, Gloria made an expertly tailored going-away suit for Anna’s trousseau. Probably the greatest gift to her world was Gloria’s capacity to be a fiercely loyal and steadfast friend. At the age of 14, Gloria befriended Adelyn Rocco (now Schussler) when both were hospitalized at the Hospital for Special Surgery, when Gloria underwent hip surgery. That friendship has lasted undiminished to this day. Her friendship with Gloria Villano from the time of their moving together to NJ to work at Revlon was legendary. They were known as Gloria D and Gloria V, and it ended only in the untimely death of Gloria V. For many decades Gloria had a special friendship with George Marotta and his mother Modesta. They particularly enjoyed trips to the race track for betting fun. Her coworkers at Revlon remained her buddies and companions on trips to Atlantic City, where Gloria was an avid player. She was also joined in trips to AC by her brothers and sisters and spouses, and sister-in-law Dolores’ Aunt Reeni, and these became a kind of family reunion for a number of years. Gloria was bold and skillful at gambling and often won handsomely. And when she won big she blew it all on a big celebratory feast for her companions. Gloria loved holiday gatherings in recent years when the far-scattered members of the family came together bringing their signature Italian specialties. Gloria was famous for her caponata—a relish of celery, olives, pickled peppers and anchovies, and for the best frittata on this side of the Atlantic. Always generous, always kind, always beloved by her large family, that now deeply grieves over their loss.

Gloria DiPasquale passed away on June 2, 2021, from cardiac/respiratory failure, three weeks after having turned 95. Gloria was born in Manhattan, NYC, on May 12, 1926. She was the fourth of eight children born to Rose and Michael DiPasquale,... View Obituary & Service Information

The family of Gloria DiPasquale created this Life Tributes page to make it easy to share your memories.

Gloria DiPasquale passed away on June 2, 2021, from cardiac/respiratory...

Send flowers to the DiPasquale family.