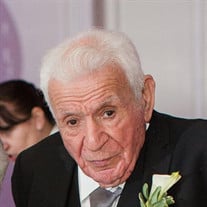 Gerard A. Russo of Somers, NY, formerly of Eastchester, NY, passed away on March 29, 2020. Gerard was born September 24, 1922, in Mt. Vernon, NY, to Peter & Lena Russo. Gerard served honorably in the United States Army during WWII. He married Carmela Tamburello on June 12, 1949. They lived in Eastchester, NY, before moving to Somers, NY, in 2007. Gerard worked for the United States Postal Service. Gerard enjoyed watching the Yankees, traveling, and seeing his family at get-togethers. He was a stamp collector and always wanted to have a good time. He is survived by his wife Carmela and 2 daughters, Geraldine Kitsakos (Al) and Debbie D’Auria (Nick). He is also survived by 5 grandchildren, Michael Spatafore (Lindsey), Marc Spatafore, Nicky D’Auria, Danielle Murphy (Chris), and Marlana Kitsakos, as well as one great-grandchild, Jackson Murphy.

The family of Gerard A. Russo created this Life Tributes page to make it easy to share your memories.

Send flowers to the Russo family.