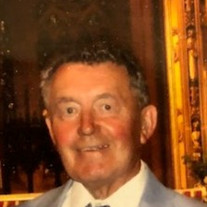 Gerard L. Blenkle of Yorktown Heights passed away peacefully with his family by his side on Oct. 9, 2019. Gerry was born October 7, 1936 in Jamaica NY to proud German immigrants, Arthur & Emma Blenkle. After obtaining his electrical engineering degree from Polytechnic Institute of Brooklyn, Gerry served honorably in the United States Army as a Lieutenant in the Army Corp. of Engineers, in both active and reserve duty. On October 8, 1960, he married the love of his life, Christa Hartmann. Culminating a rewarding and distinguished professional career, Gerry retired in 1994 from Con Edison, where he was an Electrical Engineer since 1959. He and Christa then began their second career as grandparents and snow birds, spending winters at their Florida home. He loved traveling with his wife and especially visiting family and friends along the way. Gerry was most proud of his family, and did not miss an opportunity to share in the joys and accomplishments of his children and grandchildren. An avid sports fan, Gerry spent many hours following his favorite teams - the Mets and Jets, playing golf, and attending Spring Training Camp with anyone he could get to go with him. He was proud to be invited as a regular guest to the MLB Alumni dinner for the last 20 years, and was friends with many Hall of Fame Baseball players. Gerry was an active parishioner of St. Patrick’s Church in Yorktown where he participated in the DDA, Cursillo and Marriage Encounter programs. Gerry is survived by his loving wife Christa, sons Gerard Blenkle (Christina), Rev. Joseph Blenkle and Robert Blenkle (Lisa). He is also survived by his four adoring grandchildren - Robert, Thomas, James and Elizabeth. He is predeceased by his brother, Arthur Blenkle. Family and friends will honor Gerry’s life at the Yorktown Funeral Home on Monday from 4 p.m. to 8 p.m. A Mass of Christian burial will be held on Tuesday at 11 a.m. at St. Patrick’s Church in Yorktown Heights, with interment to follow at Gate of Heaven Cemetery, Hawthorne, NY. In lieu of flowers, the family requests donations be made in Gerry’s name to The Angel’s Fund at St. Mary’s School in Fishkill, NY.

Gerard L. Blenkle of Yorktown Heights passed away peacefully with his family by his side on Oct. 9, 2019. Gerry was born October 7, 1936 in Jamaica NY to proud German immigrants, Arthur & Emma Blenkle. After obtaining his electrical engineering... View Obituary & Service Information

The family of Gerard L. Blenkle created this Life Tributes page to make it easy to share your memories.