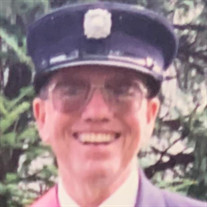 George Emerson Wolf was born December 25, 1933 in White Plains, NY. He is preceded into death by his parents, Winifred and George, his brother, Raymond, and his son, Michael. Survived by his wife of 58 years, Monika, as well as children Christopher, George, and Diana, as well as grandchildren Leilani, Gabrielle, Zachary, Alex, and Renata. George was raised in Briarcliff Manor and joined the fire department at age 18. After a year of college, George joined the Air Force and served as a radio intercept operator. He was stationed in Tripoli and Germany, postings which allowed him to take trips by motorcycle when he had leave. George spoke very fondly of these trips and the sights he was able to see. Upon returning stateside, George continued to travel and took a 12,000 mile road trip across the U.S. and Mexico with his good friend, Freddy. He would tell fond stories from this adventure for the rest of his life. George attended Manhattan College on the G.I. Bill and in 1962 he met Monika Theresa Romberger. They were married and started a family within a year. George had a lifelong love of cars, and started his career at General Motors. He loved working with people and excelled at selling cars and establishing good relationships with customers. George was passionate about serving in local fire departments. He was a lifetime member of the Briarcliff Manor fire department, serving for 68 years, and a member of Putnam Valley for 45 years. He described being a fireman as being about friendships and helping people. George was a trustee of the German American-Club of Putnam Valley and a member of the Bavarian Club Edelweiss Westchester. He also volunteered as a driver at the Putnam Valley Senior Center, where he had a close-knit group of friends. Known for his booming laugh, his compliments, and being a good listener, George lived life to the fullest. He will be sorely missed by his family and friends. A visitation will be held at the Yorktown Funeral Home in Shrub Oak on Sunday, September 27 from 2:00 to 5:00 pm. A funeral mass will be held at St. Columbanus in Cortlandt Manor on Monday, September 28 at 10:30 am, with interment to follow in the Sleepy Hollow Cemetery. Social distancing protocols will be observed. A celebration of life will be held at the German-American Social Club at a later time. In lieu of flowers, the family asks that donations be made to St. Jude's Children Hospital, the American Cancer Society, or other cancer related foundation.

George Emerson Wolf was born December 25, 1933 in White Plains, NY. He is preceded into death by his parents, Winifred and George, his brother, Raymond, and his son, Michael. Survived by his wife of 58 years, Monika, as well as children Christopher,... View Obituary & Service Information

The family of George E. Wolf created this Life Tributes page to make it easy to share your memories.

Send flowers to the Wolf family.