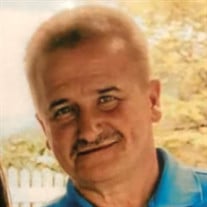 Edward Moreno (Eddie) passed peacefully on Friday, May 10, 2019 surrounded by his family and loved ones at his home in Putnam Valley, N.Y. Eddie was born on May 11, 1958 in Tabernas, Spain to Antonio and Leocadia (Garcia) Moreno. Shortly after graduating from White Plains High School, he went to work for Westchester County Department of Corrections (1980-2013). In 1990, he married Janine S. Brescia and together they had two beautiful daughters, Jenny Ann and Michele Nicole and three dogs (Ram, Pandy and Gunny). In 1989, they bought their first home in the town of Cortlandt Manor before moving to Putnam Valley, where his home was referred to as “Moreno Mountain”— a place where many BBQ’s, family gatherings, holidays, and pool parties took place. It was and will continue to be the place to be! Eddie always had a warm smile on his face and was loved by all. His passions included; working on his classic cars, attending car shows with his daughters, playing golf, fishing on the boat, cooking, and traveling. Most of all, Eddie loved being with his family. It didn’t matter what they were doing or where they were, there was always constant laughter, smiles and a deep love surrounding them. Eddie’s favorite place to vacation was Emerald Isle, North Carolina where he and his family would spend two weeks each summer with close family and friends at the beach. Since a young child, Eddie was an excellent soccer player and always had a love for the sport. He was the coach of his daughter’s team for several years and enjoyed watching and going to games with his brothers and friends. Eddie is survived by his wife Janine S. Moreno of Putnam Valley, daughters Jenny Ann and Michele Nicole, and future son-in-law Phil Ricciardi. He is also survived by his Mother Leocadia Moreno, 6 siblings (Frank, John, Maria, Tony, Carmen, and Joe (Pepe) along with many nieces, nephews, cousins and friends. He is predeceased by his father Antonio Moreno.

Edward Moreno (Eddie) passed peacefully on Friday, May 10, 2019 surrounded by his family and loved ones at his home in Putnam Valley, N.Y. Eddie was born on May 11, 1958 in Tabernas, Spain to Antonio and Leocadia (Garcia) Moreno. Shortly after... View Obituary & Service Information

The family of Edward Moreno created this Life Tributes page to make it easy to share your memories.

Send flowers to the Moreno family.