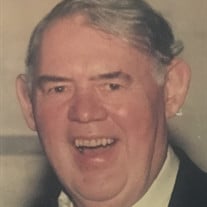 Edward J. Keegan, 82, of Yorktown Heights, New York passed away on Saturday, March 13, 2021 at his winter home in Margate, Florida. Ed was born in Hollis, New York to Simon and Helen (Lanigan) Keegan on October 1, 1938. Ed lived in Brooklyn, New York and Fish Creek, New York during his childhood, and graduated in 1957 from James Madison High School in Brooklyn, New York. Ed enlisted in the US Army in 1957 and was honorably discharged in 1963. Ed was very proud of his time as a member of the New York City Police Department and retired in 1980 from the Crime Scene Unit. He was also a member of the National Guard as a Staff Sergeant from 1978 until 1980. Ed enjoyed reading many crime detective books and was such an avid viewer of Law and Order, he could have written many of the episodes. After retiring from the NYPD, Ed worked in various security capacities for companies such as Pfizer, Inc and IBM. In the 1990s he started volunteering for then State Assemblyman George E. Pataki and traveled the state with him during his campaigning days for NYS Governor. The time Ed spent working in the Pataki Administration was one he always fondly remembered. After retiring from state service, Ed devoted his time to his favorite things; his wife of 53 years Theresa (McKenna) Keegan and his grandchildren. Terry and Ed spent half of their time in Margate Florida, golfing, going on cruises and enjoying friendships. When in New York, they spent time going to sports and school events for their grandchildren. He is survived by his wife, Terry, his daughter Rosemary Heisler and son-in law, Neil of Fort Mill, South Carolina, son Edward J. Keegan, Jr. and daughter-in law Julie of North Salem, New York, and daughter-in law Danielle Keegan of Shrub Oak, New York. He is preceded in death by his son, Kevin Keegan, parents, Simon and Helen Keegan, his sisters and brothers; Adelaide Rowe, Helen Quigley, Joan Hafford, Mary Lou McNally, Richard Keegan, Donald Keegan and Ann Keegan. The gates were full of familiar faces for him when he arrived home. He also leaves behind his most treasured grandchildren, Kevin, Grace, Patrick, Sarah, Liam and Keegan, and many nieces and nephews. He was a proud member of Irish-American Clubs (Westchester County and Florida) and leaves behind many good friends. He was a parishioner of St. Elizabeth Ann Seton Church in Shrub Oak, New York. Arrangements for Funeral Service Sunday, March 21, 2021 2pm-6pm Yorktown Funeral Home 945 East Main Street Shrub Oak, NY 10588 Church Service Monday, March 22, 2021 9:45 am Saint Elizabeth Ann Seton 1377 E Main Street Shrub Oak, NY 10588 In lieu of flowers, donations in his name may be made to Franciscan Friars of Atonement www.atonementfriars.org/make-a-donation.

The family of Edward J. Keegan created this Life Tributes page to make it easy to share your memories.

Send flowers to the Keegan family.