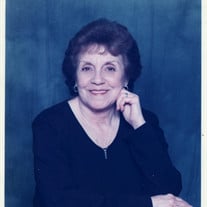 Catherine (Kay) Praino of Mahopac passed away March 4, 2020. She was born in the Bronx in April, 1936 to Santo and Anna Duci. She married Anthony (Tony) J. Praino (deceased October 4, 2012) on June 18, 1955 at St. Mary’s Church in the Bronx. They had two children, Anthony and Ann Marie, and in 1964 they moved to the suburbs. Kay didn’t drive, but soon realized that in order to get anywhere near her new home, she needed a driver’s license. Tony taught her, and although it was a slow process, she eventually got her license and never looked backed. Kay was a numbers person and had an affinity for accounting. She ventured back into the workforce, when her daughter was young, as a part-time bookkeeper for a local bar and grill. Once her daughter entered high school, Kay worked full time as an accounting clerk at E for M - later PPG - in Pleasantville, NY. However, the job she spoke the most about, was her position as an Administrative Assistant at IBM Research in Yorktown. She made many friends at IBM and frequently shared stories about her time there. Kay and Tony were fortunate enough to enjoy many vacations and adventures together. Her dream had been to visit Sicily, the birth place of her father, and explore her ancestry, which she did. One of her most memorable trips was a cruise to the Caribbean with her children and grandchildren, which was given as a gift for her 50th wedding anniversary. Once Tony passed, Kay became an active member in the Widow and Widowers group which meets at St. Patrick’s in Yorktown. She made friends, went on trips and eventually became the Treasurer for the group. Kay was extremely proud of her four grandchildren, Nicholas, Kim, Joseph and Kayla and kept up with each of them via text messages and phone calls. She played a very important part in each of their lives and they all miss her dearly. Kay is survived by her son Anthony P. Praino, his wife Kathy, daughter Ann Marie Mozdzierz, her husband Joe, her brother Albert and four grandchildren, Nicholas and Joseph Mozdzierz, Kimberly and Kayla Praino. The family will receive friends at the Yorktown Funeral Home on Monday, March 9, 2020 from 4pm to 8pm. Mass of Christian burial will be held on Tuesday March 10, 2020 at St. Elizabeth Ann Seton Church at 10am. Entombment to follow at Rose Hill Memorial Park Cemetery. In lieu of flowers, donations to the American Cancer Society(www.cancer.org) or the American Lung Association (www.lung.org) would be appreciated. To send flowers or a memorial gift to the family of Catherine Praino please visit our Sympathy Store.

The family of Catherine Praino created this Life Tributes page to make it easy to share your memories.

Send flowers to the Praino family.