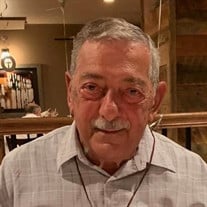 Carmine D’Alessio, of Yorktown Heights, NY, passed away on March 24, 2021. He was 86 years old. Carmine, aka Bob, was born in the Bronx on July 16, 1934 to parents Carla & Bernardino D’Alessio. He is preceded in death by his wife Eileen D’Alessio in 2014. He is survived by his children, Steven D’Alessio (Lynn), Carla Carone (Anthony) and Andrea D’Alessio (Mark); his grandchildren Stephanie Papp (Ken), Nicolas D’Alessio, Alexa Carone and Jack Candido; and 2 great grandchildren, Aubrey Papp and Carter Carone. Carmine grew up in the Van Nest section of the Bronx with his sister Mary and brothers Jimmy, Albert, and Renato. He proudly served in the US Navy during the Korean War in 1950 & sailed on the DD850 Joseph P. Kennedy, Jr. Carmine worked in the floral business in his early career. He married Eileen Sgueglia, the love of his life, in 1956 and together they raised 3 children. He later joined the Triborough Bridge & Tunnel Authority where he was employed until he retired in 1997. During retirement he returned to the floral industry, helping out former colleagues in the business, and in the floral department at the former Food Emporium in Yorktown Heights. Carmine was a very active and charismatic man, who was loved by everyone who knew him. He was talented in art & floral design. He enjoyed reading, listening to music, golf, cooking, gardening, history and coin collecting. His family and friends will always remember him as a loving father, adoring grandfather and a loyal friend who enjoyed life to the fullest.

The family of Carmine D'Alessio created this Life Tributes page to make it easy to share your memories.

Carmine D’Alessio, of Yorktown Heights, NY, passed away on March...

Send flowers to the D'Alessio family.