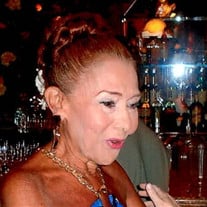 Barbara Schiliro Principe from the Bronx, Yonkers, and more recently of Peekskill set on her journey back Home on Feb.13,2021. For those who had the fortune of meeting Barbara and for those who had a smile put on their face when they heard of her, this is just another opportunity to smile as we speak about her with love, and certainty that she is in peace with the Lord and those who have left us before. Barbara was born April 9,1945 in the Bronx to Vincent and Olga Schiliro. Since a child she always had her ways, as when she threw that rock at Junior (Amedeo)Principe, hitting his head on 159th street in the Bronx where they both grew up. It seemed love at first site since 12 years later, on April 4th, 1964 they got married. Soon they were blessed with their two sons Matty, in 1966, and Vincent, in 1970. Throughout her life Barbara's free spirit grew. Life seemed to brighten up everytime She was around. Not only because of those impeccable outfits that would attract every girl's eyes, showcasing her incredible sense of style. But more so because Barbara always had that rare ability to make everyone feel like an old friend, welcome, and at home. She would engage in conversations and raise people's spirits with her warm, kind, loving heart. Barbara would bring laughter, and a sense of harmony to any place she was. It is easy to understand why family and friends would gravitate around her, anytime, to get together for dinner, cup of coffee, a glass of wine and especially at the pool in the summer. Barbara was an incredible person that reflected in her roles as wife, mother, grandmother, sister and friend. You could always count on her especially during difficult times. Without imposing her traditional values she embraced us with an incredibly modern spirit. Her family came before anything else. But although "blood is thicker than water" as she always said and believed, she "transfused" that love to many, as to her in-laws. She not only introduced her son- and daughters-in-law as her children but she treated them like so. However if an argument occurred between one of her sons and their spouses, there was of course no chance for the inlaw (seriously). When it came to her only grandson Vincent, she referred to him as "the light of her life". Seeing him grow into a young man was one of her greatest joys. You could count on Barbara anytime of the day or night.Through difficult times in life it was reassuring to have Barbara by your side making it easier. She was a tremendous support in everyone's life. We treasured that in many different ways: stopping by in the morning for breakfast, before facing the world; those quick (minimum half hour) daily check in calls, her sons would not miss for the world; the advice for how-to anything, or just for the pleasure of that friendly, be-understood chat without which the day did not seem done. Our days will be longing for this until we meet again. Barbara will be greatly missed by her Husband Amedeo Principe, sons Amedeo Principe Jr., Vincent Principe (predeceased), Grandson Vincent S. Principe, Son in Law Adauri Camargo, Daughters in law Susanna D'Angelo and Isabella Gaglioti, Brother and Sister-in-law Sal and Helen Schiliro, Sister-in-law and Brother-in-law Richard and Gloria Lovisolo. As well as numerous beloved nieces, nephews, cousins and friends. Family and friends will honor Barbara's life at the Yorktown Funeral Home on Tuesday Feb. 16, 2021 from 3 to 8pm. A religious service will be held at the funeral home on Wednesday at 10am. Followed by an interment at Gate of Heaven Cemetery. In lieu of flowers it is requested that a donation be made in the name of Vincent Principe to SAVE Suicide Prevention (save.org).

Barbara Schiliro Principe from the Bronx, Yonkers, and more recently of Peekskill set on her journey back Home on Feb.13,2021. For those who had the fortune of meeting Barbara and for those who had a smile put on their face when they heard... View Obituary & Service Information

The family of Barbara Principe created this Life Tributes page to make it easy to share your memories.

Barbara Schiliro Principe from the Bronx, Yonkers, and more recently...

Send flowers to the Principe family.