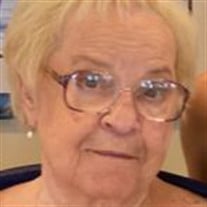 Barbara A. Madison (nee Yotz) June 14, 1940 - April 12, 2021 CORTLANDT MANOR, NY - Beloved wife, mother, grandmother, and friend Barbara Madison went home to God on Monday, April 12th, 2021 at the age of 80. She lived at Jacob’s Hill in Cortlandt Manor, New York prior to her peaceful passing at Westchester Medical Center with family by her side. Barbara was born on June 14,1940, in Yonkers, NY. She was the daughter of Nicholas and Nellie (Gurska) Yozzo and the youngest of 3 girls. Yonkers was her home for many years, but it was also where she met the love of her life Harry Madison. November 13,1965 at St. Mary’s Church Barbara and Harry got married and started their family. They raised three beautiful children together and settled in Continental Village in Garrison for many years before moving to Jacobs Hill in Cortlandt Manor, NY. Barbara was predeceased by her husband, Harry, of 51 years; her Mother, Nellie; her Father, Nicholas; her sister, Carolyn; her brother-in-law, Joseph Iwanowski; and her Nephew, Paul. Barbara and her family spent many summers together on Long Beach Island, NJ, up until this past summer when she was able to celebrate the wedding of her oldest granddaughter, where she enjoyed herself with family. A large piece of Barbara’s heart resides off of Exit 63 on Long Beach Island. The Barnegat Lighthouse, Schooner’s Wharf, and Surf City are just a few places that Barbara often called home. She would carry on many family traditions, especially around the holidays. She loved to cook and bake and was known by her grandchildren for her chicken cutlets. Whenever she was cooking she would often make you try it and “expand your palette”...“because you’ll never know if you like something unless you try it.” A woman of consistency, Barbara enjoyed sitting at her white gazebo, doing crossword puzzles, and listening to “Dancing Queen” by Abba. She loved to watch golf as well as baseball and basketball. She even got to watch opening day of the Yankees, but you would often hear her cheer for the Red Sox. She was an amazing Pre-Kindgergaten teacher for many years at St. Patrick’s School in Verplanck, until her retirement in 2004. Her love for teaching children later inspired two of her granddaughters to become elementary school teachers. Barbara is survived by her 3 children and spouses: Suzanne (Donald) Sudol of Garrison; Jennifer (George) Whitehead of Hopewell Junction; and Neil (Tara) Madison of Wappingers Falls. She was also blessed with 8 grandchildren: Kaitlyn (Thomas) Smith; Samantha and Alexandra Sudol; Hannah, Kelsey, and Emma Whitehead; and Brianna and Brandyn Madison. She is also survived by her sister, Theresa (Frank) Sherkus of Oxford, CT and many nieces, nephews and friends. Anyone that knew Barbara, knew she would always give you her opinion and advice; she was a strong and determined woman. She was tiny but had an outstanding personality. Barbara touched the hearts of everyone she encountered — to know her was to love her. She will forever be missed, but we know she is reunited with Harry and they will always watch over their loved ones. Catholic Mass to celebrate Barbara will be held on Saturday, April 17, 21 at 11:00 am. St. Patricks Catholic Church 240 11th Street, Verplanck, NY In Lieu of flowers, please consider making a donation to Make-A-Wish Hudson Valley @ www.hudson.wish.org “I’ll See you when I see you”

The family of Barbara Madison created this Life Tributes page to make it easy to share your memories.

Send flowers to the Madison family.