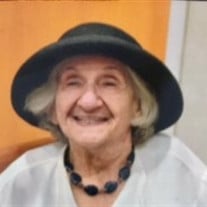 Anne Bard Rosenblatt, of Yorktown Heights, NY, passed away peacefully on Saturday, February 12, 2022. She was the remarkable age of 101. She was born on January 24, 1921, in Wasilkov, a small village near Byalistok, Poland, the daughter of the late Joseph and Miriam Boroditsky. Anne was predeceased by her husband of 37 years, Kalman Rosenblatt, and their son, Mark Joseph Rosenblatt; her sister, Sophie Ginsparg; and her brother-in-law, Joshua Ginsparg. Anne leaves behind her beloved daughter, Deborah Richmond, and her son-in-law, Neal Richmond, of Yorktown Heights, NY, as well as her grandsons, Jacob Rosenblatt (Burlington, VT), Matthew Rosenblatt (Somerville, MA), and her daughter-in-law, Margery Rosenblatt (Burlington, VT). She also leaves her nieces and nephews, with whom she was very close: Myra Berkowitz, Jerrold Ginsparg, Paul Ginsparg, Evelyn Ginsparg, and several grand nephews and nieces. Anne lived a full life with some difficult obstacles, but always seemed "invincible" and persevered through those times. During her lifetime she lived on two continents, in four countries, and in five different cities. She mastered at least four languages. She was always a "working" mother starting as a bookkeeper in her uncle's company in New York City and continuing as a bookkeeper there until the family relocated to Yorktown Heights. She then started work at IBM in their Financial Department and was promoted to the Marketing Division, where she remained for 20 years. After retirement, she continued to work occasionally, training new IBM employees. She was very involved with the Yorktown Jewish Center and Sisterhood and was honored as Sisterhood's "Woman of the Year". She was proud of becoming an adult Bat Mitzvah at 72 and received the Jewish Theological Seminary's "Woman of Achievement" Award. Anne had a deep love of her children and her grandsons. She loved playing with her grandsons when they were little and took every opportunity to see them as they grew. She was an enthusiastic mother to Debbie and Mark and always wanted the best for both. Above all, Anne had an outgoing and cheerful personality. She loved going to parties and danced when she was well into her nineties. A graveside service will be held on Wednesday, February 16, 2022 at 1:00 PM at Kensico cemetery, Sharon Gardens, 273 Lakeview Ave., Valhalla, NY. Donations to the Susan G. Komen Foundation www.komen.org or the breast cancer charity of your choice will be greatly appreciated.

Anne Bard Rosenblatt, of Yorktown Heights, NY, passed away peacefully on Saturday, February 12, 2022. She was the remarkable age of 101. She was born on January 24, 1921, in Wasilkov, a small village near Byalistok, Poland, the daughter of the... View Obituary & Service Information

The family of Anne B. Rosenblatt created this Life Tributes page to make it easy to share your memories.

Send flowers to the Rosenblatt family.