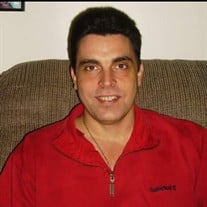 Andrew Fasulo of Cortlandt Manor passed away unexpectedly at home on May 14, 2020. Andrew was born in the Bronx on March 11, 1963, the son of Andrew Fasulo and Winfred (Kinane) Fasulo. He attended Lakeland high school where he graduated in 1981. He married his high school sweetheart Suzanne DeMasi on September 5, 1987. After graduating from high school he pursued a career in law enforcement. Andrew was appointed to the New York Police Department on January 9, 1986. His field training was in the 50th precinct. He was promoted to Sergeant in 1990. He worked in the 41st and the 46 precincts respectively. In 1997, he transferred to work for Manhattan North Narcotics and retired September 1st 2006 with many awards and accolades for his service. He was a brave first responder to the horrific ground zero of the September 11th attack. After his police retirement, he worked for many years at Fordham University as a security supervisor, where he was well known around campus. He kept himself busy trading in the stock market and never stopped learning. He took pride in his many home improvement projects over the years. He rooted for the Giants and Yankees, and enjoyed live music. His favorite band was Pink Floyd and he saw cover bands every chance he got. He enjoyed cooking and grilling on the barbecue for the whole family. Summer vacations at the beach were his getaway where he relaxed with family. He Is survived by his loving wife Suzanne of Cortlandt Manor, His adoring children Christina Fasulo of Manhattan, Michael Fasulo of Jersey City and Andrew Fasulo of Cortlandt Manor. He is also survived by his devoted sisters Susan Mayfield, Thomas of Wappinger Falls NY, Nancy Fasulo Jones of Mahopac NY, Debra Lynch, Donald of Wappinger Falls; and their children - his niece’s (Tara, Rachael, Sarah and Meghan) and his nephews (Evan, Thomas, Sean, Matthew and Connor). As well as numerous uncles, aunts, cousins, and 7 great-nieces and nephews. To those who knew him, Andrew was known for his huge capacity to love and serve people, especially his family. He could light up any room with his smile and draw a crowd with his plethora of storytelling. His infectious laughter could be heard for miles. As Andrew's family and friends grieve, we are left with not only memories of him but also remnants of the man we loved so dearly. A hole will be left in all of our hearts that can never be filled. Interment at Rose Hill Cemetery. Given the circumstances, in lieu of flowers, donations may be made to the American Heart Association in his memory.

Andrew Fasulo of Cortlandt Manor passed away unexpectedly at home on May 14, 2020. Andrew was born in the Bronx on March 11, 1963, the son of Andrew Fasulo and Winfred (Kinane) Fasulo. He attended Lakeland high school where he graduated in 1981.... View Obituary & Service Information

The family of Andrew Fasulo created this Life Tributes page to make it easy to share your memories.

Andrew Fasulo of Cortlandt Manor passed away unexpectedly at...

Send flowers to the Fasulo family.