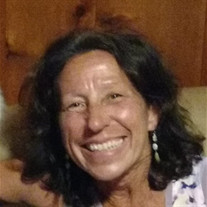 Andrea Karl of Putnam Valley (formerly of Rye, NY) passed peacefully on Wednesday September 29, 2021. She leaves behind her husband of 38 years, Bill, her children Andrew (daughter-in-law Courtney), daughter Julia, and two grandsons, Ethan and Hudson. She is also survived by her sisters, Gail Tartaglia and Irene Stillman (brother-in-law Roger), her nieces Dawn Baxter, Laura Cox, Kate Stillman, and Lauren Watson, their husbands, and numerous great-nieces and great-nephews. As a mom, she worked a variety of jobs over the years to ensure that she was able to commit to Andrew and Julia's various activities. You may have met her through her work at Playcare, where she taught while her kids were going through preschool or at Santos' Deli in Putnam Valley, Club Fit, StoneCrop Gardens, A Natural Touch, or at any of the other positions she held over the years. She worked with pride, care, and a smile in every aspect, all while putting her children's needs first. Not only did she become a jack of all trades while working, she also volunteered with a few different organizations as well. She lent a hand to the Putnam Valley Soccer Club as a secretary while Andrew and Julia played, and continued her duties as the Team Mom for Andrew's youth teams through high school. These soccer duties did not end there, however. She tirelessly drove both kids to all of their summer development tournaments and camps, allowing them to pursue their dreams of playing at a higher level. As her kids grew older and more independent, she began volunteering, and then working, for Support Connection. You could say that this organization became her passion project. Andrea was diagnosed with breast cancer in 2003 and had used Support Connection's services as a safe space to process that journey. Andrew and Julia were none the wiser at home, as she remained the dependable woman we all know and love. Andrea was compelled to give back to such a beautiful charity, and began volunteering in her spare time. This role eventually grew into her full-time position as a Peer Counselor for the last 15 years. Andrea used her strongest qualities of humanity and compassion to work with "her ladies" (as she called them), making sure they knew that they were not alone in their journeys. She made sure that each of her ladies and their caregivers was heard, supported, and provided with the information they needed. It goes without saying that she would never end a phone call or visit without at least a little laughter or moment of light-heartedness. One will never fully know the extent to which her impact reached, but the stories of her actions, as told by those in the organization and the families that she worked with, will remain with us for a very long time. As she continued to work with her ladies, she drew on their strength and her own to pursue physical feats in her fifties that she would have never attempted before, even prior to her breast cancer diagnosis. After immeasurable hours of watching her children grow on a soccer field, and at the prodding of her dear friend, Andrea joined a local group of Mahopac women to play in the Goals for Hope soccer tournament. She would also go on to run the NYC Marathon in 2010 in a total time of 4:31:24- the entire time with "Amazing Grace" emblazoned on her shirt and a huge smile on her face. Throughout these activities, her ladies were at the forefront of her mind- she thought of their fight, their strength, their personal "marathons" that they had to endure, all with such amazing grace. Andrea and her husband Bill were together for 40 years and remained strong and steadfast in their commitment to each other. At their core, they loved one another and their family and friends fiercely. They watched lovingly as the children they raised became successful in each of their pursuits. As their children grew into adulthood, Andrea and Bill began traveling again, whether it was day trips or short vacations. They visited Vermont in the fall and Cape May in the summer, and during the in-between, frequented upstate to play with their grandsons. They enjoyed their time together and reminisced about the trips to California and Canada they had taken in their younger years, as well as their family trips up and down the east coast. When all was said and done, one always had the other to rely on. Andrea's love for her family, her sisters, her nieces and nephews, and of course, her grandsons, was widely known. She regaled everyone she met with an uplifting, and more often silly story that centered around these characters in her life. Countless nights were spent around a table, enjoying happy company with stories, love, and laughter. And when Andrea became a YiaYia to her grandsons, she could talk and laugh for hours. Ethan and Hudson could do no wrong- she watched them grow with only love for them in her eyes and heart. They became the brightest stars in her life, her "superheroes" whose superpower was joy. There wasn't a single moment that YiaYia didn't oblige Ethan and Hudson's every whim (and whine)- and that adoration was mutual. Andrea's family requests that, in lieu of flowers, donations be made to Support Connection, Inc. And from time to time, think of Andrea and smile. Perhaps you'll take a stroll on the beach, or sip a martini at 5:00pm or hear a laugh that reminds you of her. And in that moment, wherever you may be, know that her love still surrounds you as it does all of us.

The family of Andrea Karl created this Life Tributes page to make it easy to share your memories.

Send flowers to the Karl family.