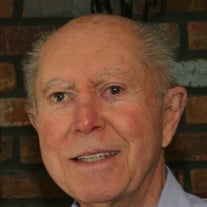 Alfred “Al” DeJoseph died peacefully at his home on September 17, 2020 with the love and comfort of his family around him. He was 91 years old. Al was born in the Bronx on March 9, 1929, the son of the late Alfred and Blanche (Renzi) DiGiuseppe. After skipping two grades in primary school, he graduated from Evander Childs High School in the Bronx. His studies at NYU were interrupted when he proudly served his country in Korea from 1950-52 with the United States Army Corps of Engineers. Al married Thelma (Copeland) in 1954 and they moved to Yorktown in 1963 with their four children. Al spent many years working as a pattern maker in the Garment District of Manhattan, following in the footsteps of his father and uncle. He later switched careers to become a salesman for Metropolitan Life. Al enjoyed being outdoors and working in his yard, building projects in his home, mathematics, puzzles, and gymnastics. He especially loved hosting large gatherings at his home, most notably Thanksgiving dinners. He was always the life of the party and he loved his family very much. Al took great pride in his family and was willing to make great sacrifices for them. He was a devoted husband, father, grandfather, great-grandfather, uncle, cousin, and friend. He is survived by his wife Thelma of 66 years; children Michael DeJoseph of Yorktown Heighes, NY, Linda Haines (Chris) of Ridgefield, CT, Kathy Orza (Paul) of Pleasant Valley, NY, and John DeJoseph (Donna) of Brookfield, CT; eight grandchildren, two great-grandchildren, and many cousins, nieces and nephews. Family and friends will gather at St. Patrick’s Church 137 Moseman Road Yorktown Heights NY on Saturday, September 19, 2020 at 11:30 am for a Mass of Christian burial. If you are unable to attend, the mass will be lived streamed. Use the following link to join the family.https://client.tribucast.com/tcid/85339656 Streaming service will begin at 11:30am In lieu of flowers, donations may be made in Al’s name to the Alzheimer’s Association or the Veterans Administration.

The family of Alfred Albert DeJoseph Jr. created this Life Tributes page to make it easy to share your memories.

Alfred “Al” DeJoseph died peacefully at his home on September...